Watching this film makes me see why it is such a beloved movie!  The feeling one gets from watching it is akin to reading a good myth or a George MacDonald novel.  If you have yet to read George MacDonald, be sure to place his Phantasies and Lilith on your reading list.  Here’s some stuff I’ve written about his influence and I have mentioned him here, here, and here. 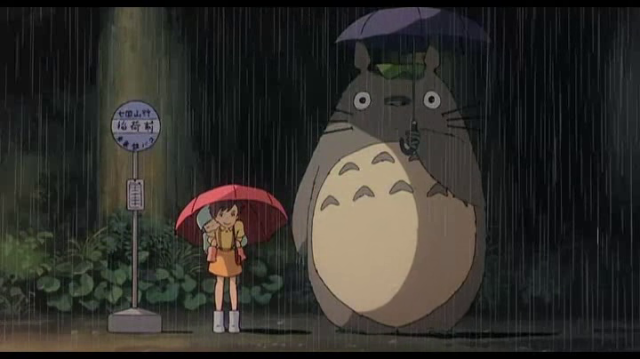 The feeling which I’ve alluded to above is the feeling of touching the sublime or the fantastic.  In My Neighbor Totoro, we follow the wanderings of of two girls, Satsuki and Mei, who move to the country with their father.  People accept the world of fantasy as a matter of course, and the best human attitudes to its existence are playfulness and enjoyment.  For example, Mei’s response to finding totoro, a giant creature which combines the traits of a bunny and a bear, is nothing less than giggling delight.  Similar scenes and reactions to the fantastic make this a very heartwarming film.

At the same time, the film does note that Japanese folklore can be pretty dark as well.  This darkness is especially well conveyed when Mei becomes lost in her desire to visit her sick mother.  The searchers find a small shoe in a body of water and try to uncover her body therein.  How much does one want to bet that, if Mei should have been found dead, the villagers would have claimed that a kappa got her?

Then again, the movie displays superb animation and a wonderful family atmosphere.  You can see how tightly knit the family is from the way the children interact with their father, particularly during their bath together when they laugh and scream away their fear of the the storm raging outside.  I mentioned that Satsuki and Mei’s mother was ill earlier.  Other than play with Totoro, the children desire their mother’s return more than anything else.  This lends just enough tension to atmosphere of the film.  And so, I gave it a full five stars.  You might think that a bit generous, but My Neighbor Totoro is a wonderful film.