I intend this to be the first of three articles on Shiki, a profoundly interesting vampire anime released in 2010.  In this article, I’m going to argue that its author retold the medieval epic Beowulf, or at least, that it derives much of its subject matter from this epic.  Before some of you decide this idea to be unlikely, don’t forget than the Japanese love drawing from Norse mythology and sagas.  Why not also peruse the contemporaneous literature of medieval England?  Of perhaps they can arrive at the epic through knowledge of another famous post-modern treatment, John Gardner’s Grendel.  But one feature of Shiki makes me feel like they must have read the epic of the middle ages: the prevalence of the most shocking crime to medieval ears–kinslaughter.

The esteemed Professor Justin A. Jackson of Hillsdale college, an avid student of medieval English literature, once lamented that people read Beowulf for the beginning and the end–the slaying of Grendel and the slaying of the dragon.  People think of this as a monster slaying story, but this understanding does not go far enough.  The prodigious fiends of the beginning and end point to the monsters in human form of the middle: kinslayers.  Grendel’s line itself is shown to be descended from the first kinslayer, Cain.  Also, Beowulf declaims this baleful rebuke–or rather, smack down–of the quibbling Ulferth:

…I have never heard

such struggle, sword terror, told about you.

Never in the din and play of battle

did Breca or you show such courage

with shining blades–not to boast about it–

though you were a manslayer, killed your brothers,

closest kinsmen, for which you will suffer

The vampires in Shiki actually go after their closest family members as their first targets.  One person even sucks dry her entire family, though none of them rise up.

Another link to Beowulf is the curious mixture of paganism and Christianity.  In Beowulf, we are led to initially believe the characters are pagan; yet, once Beowulf arrives, they speak like Christians and care not a wit for pagan gods.  Examine the Church in Shiki.  We know that it cannot be Christian.  There are neither masses nor services, neither Catholic priests nor Protestant ministers.  And yet, one window a depicts the martyrdom of a Japanese saint!  But a post-modern twist comes in the form of people blaming God for the trouble which comes to their village rather than praising God for freeing them from evil.  Indeed, the characters only speak about God–even if Shinto and Buddhist artifacts can ward off vampires.

“Alright then,” you say.  “Who is Hrothgar, Beowulf, Ulferth, the scop, Grendel, and Grendel’s mother?  There must be some connection to the characters if this is indeed a retelling.” 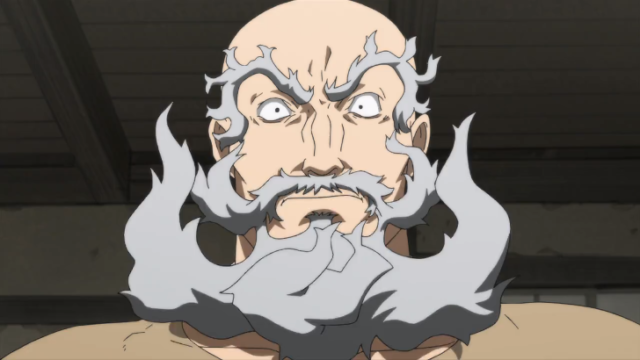 At first, I thought that there was no Beowulf.  This would go along with the theme of divine abandonment in the show.  After all, Beowulf’s entrance into Denmark is shown as coming about through divine providence.  But, here is an example of them borrowing from Gardner’s Grendel.  Mr. Ookawa fits the idea of Gardner’s Beowulf through his inexorable sense of justice, crazed single-mindedness, and strength.  He is certainly of heroic stature! 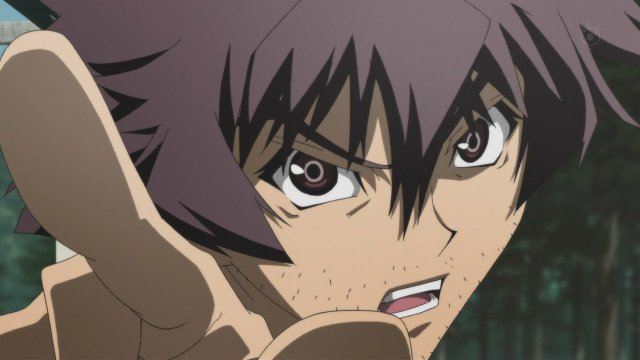 One of the neatest twists in the story is Dr. Ozaki.  We originally think him to be a kind of Van Helsing, á la Bram Stoker’s Dracula.  But, events make it clear that Dr. Ozaki is not a courageous vigilante against the vampires, but more of a leader.  He is helpless at stopping the vampire outbreak, but he can lead others to successfully squash it–the good old Jason-esque  hero.  As the chief man in the village, he fits the bill for Hrothgar.

Ulferth is a blabbering loudmouth just like Masao.  Helpless to do anything but complain.  No picture for him!

Seishin’s the one on the left. Behind him is the stain glass window with the martyrdom.

As a novelist, Seishin approximates a scop, but instead of reciting songs of glory and valor, he writes stories of misery.  This fits the post-modern twist I mentioned.

Like the hag of Beowulf, she’s a very powerful vampire.  I know Grendel’s mother is pictured as ugly, but witches in continental Europe were also imagined to be beautiful blond women like Mrs. Kirishiki.  And this is not the first time Grendel’s mother has been portrayed as a seductress.  It was also done in the 2007 Beowulf movie with Angelina Jolie playing this role. 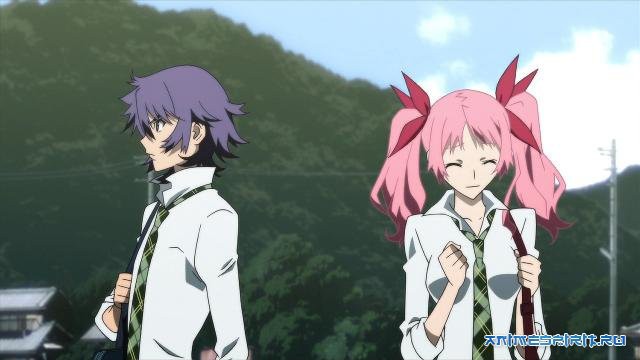 Megumi on right. I felt very sorry for this character.

Surprised?  The Sunako Kirishiki would be the obvious choice for Grendel, especially with her attachment to Mrs. Kirishiki.  But, I believe that Megumi fits the bill more perfectly.  She feels completely ostracized by the village because they mock her predilection for fancy clothing, and she thinks little of Kaori’s attempts to befriend her.  Hence she, like Grendel, is already an outsider when the story begins.  She dreams of one day leaving for the big city because she hates everyone in the village and everything about that place.  Grendel means evil in Old English.  The essence of evil is envy or ill-will.  What could be more invidious than her cheer, uttered while turning pirouettes: “I love making people I hate suffer!”  Amusingly, she does not engage in kinslaughter, but she had already killed the relationship between her and her parents through envy. 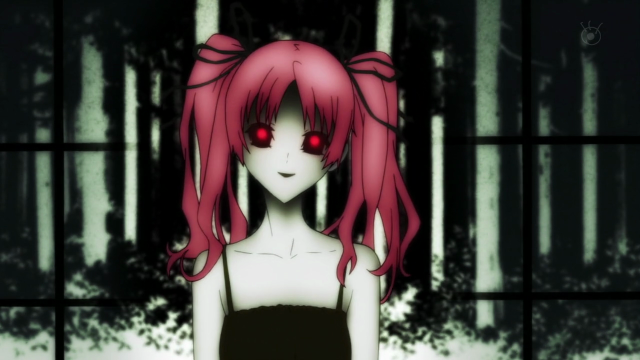 But, she also has connections to Gardner’s Grendel in that both the anime and this work attempt to make Grendel a sympathetic character.  (At least, I think the former did.  The story is told from Grendel’s point of view.  But I wanted Grendel to die from page one.)  The anime succeeded much better than Grendel in creating a sympathetic monster, and we wish to see Megumi escape at the end–quite unjustly of us, I should think!  *BIG BIG BIG Spoiler Alert!*  The manner in which Megumi dies, with her first losing her left arm and then being finished off while helpless is reminiscent of Grendel’s demise in the epic poem.

Actually, the story even has a Wiglaf and a dragon in the persons of Natsuno and Tatsumi respectively.  Just like Beowulf telling his thanes and Wiglaf that their help is not needed to defeat the dragon, the Dr. Ozaki does not enlist Natsuno’s aid until the end of the story.  Yet, he defeats the strongest of the vampires, Tatsumi, who–for his ability to walk under the sun–is considered more than a regular vampire.  Natsuno slays Tatsumi when no one had expected it of him.

There you have it!  My case for Shiki being a post-modern retelling of Beowulf!  What do you think?  Has anyone else perceived the connections between Shiki, Beowulf, and Grendel?  And be sure to watch the video of the opening lines of Beowulf recited in Old English.  It’s pure awesomeness!

6 comments on “Shiki: The Beowulf Connection”