After dropping KonoSuba, I realized that I was only keeping up with four shows this season.  Usually, I manage seven or eight.  Revisiting an earlier post made me remember that I had not yet tried out Little Witch Academia TV or Onihei.  Having watched the first episode of both series, those two are now on my watch list, and I hope to review them later.  I can already say that the animation of these two does not impress me that much, especially Onihei‘s reliance on CGI for figures in the background.  At the moment, I can say little more than that.

Why did I drop KonoSuba?  I’ve always felt on the fence with this show, though I enjoyed the first season well enough (7/10).  The comedy requires me to be in a certain mood, and the fanservice proves distracting.  The more these two drawbacks bothered me, the less inclined I was to enjoy KonoSuba‘s humor.  So, I washed my hands of it.  All the same, may those of you who enjoy the show enjoy it still more!

I’ll miss Megumin for sure.

On to the mid-season reviews.

That the manga-ka went with such a banal title surprises me–almost as much as Crunchyroll’s decision to directly translate it.  (I’m sure most of you remember their decision to translate the clumsy Subete ni F ni Naru (Everything becomes F) to The Perfect Insider or Sakurako-san no Ashimoto ni wa Shitai ga Umatteiru (A Corpse is Buried Under Miss Sakurako’s Feet) to Beautiful Bones-Sakurako’s Investigation.)  Be that as it may, the plot unrolls very slowly, as the viewers are allowed to immerse themselves in the world of ACCA.  The greatest point of interest for me was how the anime shows how society copes with federalism–one of the least popular forms of government.  I can only recall the United States, the European Union, and the Holy Roman Empire as examples.  (The efficacy of federalism in the case of the first is somewhat successful, the second a clear failure, and the third–especially compared to Germany’s history in the 20th century–a great success.)  I think the number of territories must be a nod to the original thirteen states of the United States. 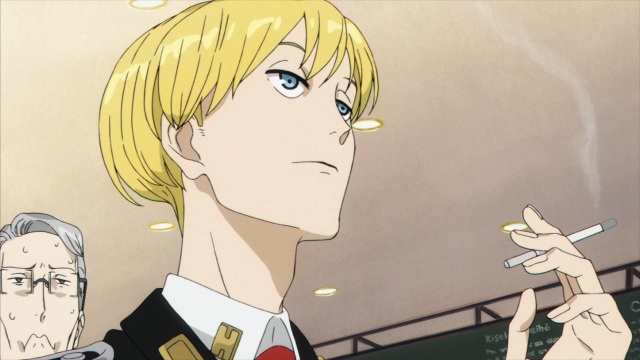 At first, I expected the coup d’état was directed at ending the thirteen territories’ autonomy in order to usher in a stronger, centralized form of government under the leader of the coup.   (Having just watched episode nine, *Spoiler* I learned that I was right about such a coup’s existence, but I did not realize that the current prince was its leader rather than a force outside of the royal family.)  Now, we realize that (*Spoiler if you haven’t seen episode seven*) Jean Otus has a claim to the throne, and the actors in the coup want to replace the current successor, a self-absorbed and capricious prince, with Jean.  Things have at last come to a head, and I want to see how they play out.

Besides my political interest in the show (People’s interest in politics is generally at an all-time high, which helps the popularity of a show based on political intrigue), the character animation displays a unique style.  My friend dubbed it languid, while I referred to it as sedate.  It’s not common to find an anime where the characters lack a wide range of expression, which is interesting to me.

2) Chain Chronicle: The Light of Haeccitas

I have but few remarks on this fantasy.  It’s your classic RPG fantasy: beautiful warrior women, a plethora of humanoid races, and stalwart warriors.  Yet, the warriors are not as stalwart as they appear: Bruckhardt first became subverted, and he was followed by the leader of the Volunteer Army, Yuri.  The anime introduces a different scale for measuring strength than one sees in Conan the Barbarian or the most trite of shonen anime: strength of heart counts fore more than strength of arm.  In this regard, the protagonist Aram displays a similarity with Frodo Baggins of The Lord of the Rings.  One might make the analogy that Bruckhardt is to Boromir as Aram is to Frodo.

This theme makes for a more satisfying tale than the recurring Japanese idea of measurable power levels standing as the most important thing.  That idea was taken so far in a recent old school anime I watched, Silver Fang aka Ginga: Nagareboshi Gin, as to make it laughable.  You might see an article on that by me soon. 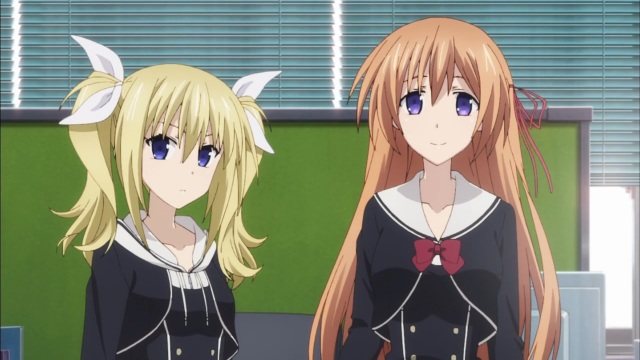 The blandness of these characters really hurts this show.  At times, I wonder whether this is supposed to be a dark dating simulator rather than a dark, sci-fi mystery.  Speaking of dark, the action of this show tends to be grim and the murders sadistic.  The initial episodes are rather weak and off-putting.  If not for my love of the original anime, Chaos; Head, I could not ignore this show’s gaping flaws!  The only two things this show does well are suspense and Mio: 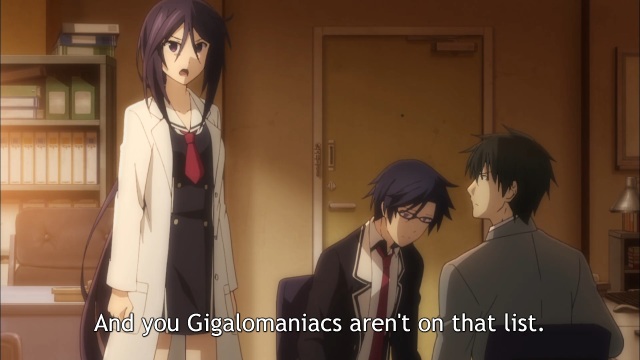 It’s a harsh personality, but at least Mio has one!

At least the show has a good opening which I can look forward to without fail, even if I’ve almost killed it by now.  Also, I’m invested in seeing just who is behind all the murders.  I still miss those things which made Chaos; Head unique (hikikomori hero, the importance of the internet to the plot, heightened surrealism, more likable characters) and which have not sufficiently been compensated for in Chaos;Child.  Let’s see if it can provide a finale suitable to the franchise at least.

Drama does not stand among my favored genres–unless a 19th century Russian wrote it, anyway.  But, watching this story unfold fills me with a sense of peace and contentment.  I suppose drama functions for me as iyashikei functions for others.  (You’re free to analyze what that says about me as you please, my dear readers!)  Besides making me relax, the characters have some depth to them, and I want to see how their struggle to save rakugo turns out.  Perhaps, I’ll have more to say at the finale.

How is everyone else enjoying Winter 2017?