END_OF_DOCUMENT_TOKEN_TO_BE_REPLACED

Curiously, the discovery of a fundamental flaw in my thinking causes me to depart a little from my intended program.  This flaw was exposed in an article on the uselessness of the liberal arts, which a friend, to whom I am eternally indebted, reblogged.  Basically, I had become an Ebenezer Scrooge, mistaking the means for the end and beginning to think of everything in terms of how they might be useful.  It embarrasses me to say that this kind of thinking had even begun to take root in regard to people!  Then, is my feeling depressed to be wondered at?  One cannot find happiness in the means, in the useful, but in things which are good for nothing because their goodness is in the enjoyment of them itself–not exactly pleasure, enjoyment.

Alastair Sim’s performance as Scrooge has not been beat since 1951.

But, it mortifies me, an educated man who had read so many examples of this fault, to be guilty of it.  Let me instead write about its latest example in anime: Imae of Hajime no Ippo Rising.  Episodes four through six cover the build up and the match itself between Aoki and Imae.  These episodes manifest the sacrifices Imae made for the sport of boxing–going even so far as to jilt his girlfriend.  To Imae, Aoki appears to be a clown and Aoki’s very participation to be a detriment to the sport.  The existence of Aoki’s frog punch in particular angers Imae to no end.

But, the two eventually begin to feel like they are similar to each other, despite Imae’s orthodox style and straight-laced personality.  The series amusingly highlights this by the appearance of Imae’s girlfriend, Kanako, who happens to be almost as unattractive as Aoki’s girlfriend, Tomiko.  The fighters are both high strung, which leads to excessive rigorism in Imae and scatterbrained antics in Aoki.  The latter case is amusingly shown by the extreme fluctuation in Aoki’s weight from Holocaust victim to porcine until he manages to lose enough weight before the match.

But, the key difference between the two lies in that Aoki realizes that the end of his actions is happiness, while the purpose of Imae’s boxing is more boxing.  A critical scene takes place in the restroom, where Imae vents his anger at Aoki for his having sacrificed nothing for the sport.  After all, Imae even left his girlfriend, despite the fact that the two of them still love each other.  Aoki then tells him that Imae shall lose, because he has lost his goddess of victory.  Fighting ought ever have a goal; otherwise, it is a vain activity.

At one point during their very exciting match, it even looks as though Aoki will win the match through using a special trick.  (I refuse to give it away!)  But, Imae sees Kanako in the audience and remembers that he took up boxing initially so that he could protect her.  This gives him the impetus and strength to avoid Aoki’s trick, and their bout continues through all ten rounds.  Imae no longer fights for fighting’s sake, but for his goddess of victory–his happiness. 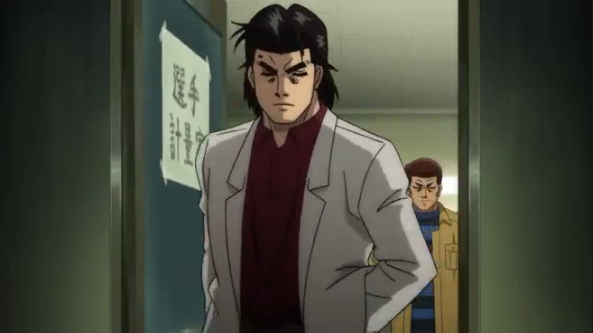 So, let us take a break from seeking things which are profitable and concentrate on that most useless and yet most desirable of things: happiness.  I’m as thankful as Scrooge in the footage below to God for patiently awaiting me to discover this truth again.