Well, dear readers, I must now prepare to go on vacation.  We leave at 4 AM first to visit my brother’s in Richmond.  The next day we travel to Sanibel and Captiva, Florida with the intention of staying there until July 1st or until we begin to feel sorry for leaving our cats.  The change of routine will do me well; however, this will cause a short period of inactivity here.  Nevertheless, I shall attempt to read some interesting works and to scribble some essays in my down time which will find their way to this blog after July 1st.  Yes, I’m an incorrigible bookworm, but this mode of being has some benefits.

The greatest bookworm of them all, Yomiko Readman!

But now to begin my review of the Penguin edition of The Two Lives of Charlemagne by Einhard and Notker the Stammerer.  The latter’s life of Charlemagne is a string of anecdotes mocking worldly churchmen and poking fun at foolish nobles.  It provides a very personal character sketch of the ruler: one gets a picture of a hot tempered, wise, commonsense, and powerful monarch–both physically and regally–with a good sense of humor, which only makes me happier to account him as one of my ancestors.  (I must confess, dear readers, that probably half of you are as nearly related, so I shouldn’t feel too proud of this; but, it’s still nice knowing that one is somehow related to an emperor.)

Here are some examples of the anecdotes to which Notker treats the reader: Charlemagne gives a merchant free rein in order to trick a bishop known for buying silly trinkets and baubles.  The merchant, declaring to the bishop that he possesses a rare oriental creature, convinces him to buy a painted mouse for “a full measure of silver” (something over fifty pounds of silver, I suppose).  This same bishop later receives an edict from Charlemagne to the effect that he must preach a sermon on a certain feast day or else forfeit his see.  While the bishop realizes that he severely lacks rhetorical skill, he does not wish to relinquish his see.  So, he stands behind the pulpit as if to sermonize, then notices a certain person who, in order to conceal the redness of his scalp, has his head covered in church.  The bishop demands that the man be brought to him in bold tones.  Then, once the man is in arms’ reach, he snatches off the covering and solemnly declares to the congregation: “Lo and behold, you people!  This fool is red headed!”  Forthwith, he continues the mass.  When some of Charlemagne’s representatives reported this to him, the monarch is said to have been pleased by the bishop making some kind of effort to obey his edict. 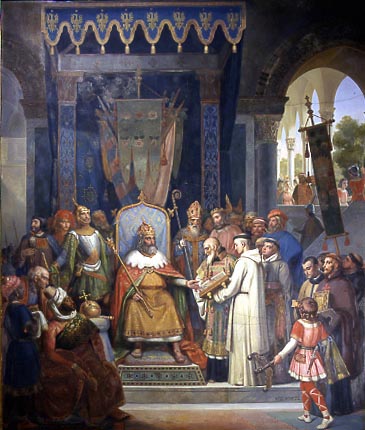 This one stands as my favorite: the Greeks have a custom that the king is disgraced whenever a fellow diner looks through a pile of meat for a better cut.  One can only take whatever is on top.  While visiting this country, a clever knight of Charlemagne’s does so, and several Greeks demand that he be put to death for “disgracing” the king.  Charlemagne says he must do as they say, but he tells the knight that he may ask for one final boon.  The knight requests that all who have seen him do this have their eyes put out.  Charlemagne agrees to this strange request and is closely followed by the queen in declaring that he did not see him do this, swearing by God.  The end result is that all the Greeks and Franks at the table swear by God and the saints that they had not seen the knight do this, who is spared from capital punishment for lack of a witness.

Einhard, unlike Notker, actually lived during Charlemagne’s time as a close confidant of the emperor, admired for his learning and character.  His work is much more historical than Notker’s, and especially useful since he was present at all the events he chronicled.  He gives more details concerning Charlemagne’s wars and even provides us with a physical portrait of the emperor.  Though, it describes the emperor’s character in a matter of fact way, it is still almost as engrossing as Notker’s anecdotes.  So, this is a very good edition for those of you who both want the historical background of this man’s times and a more personal sketch of his character.

May you all also enjoy pleasant vacations and good books this summer!