Some of you may be wondering whether I still watch anime or if I have become disenchanted with modern anime and started to focus solely on manga, like xxxHolicWing of Chronical Holic.  May she find reasons to get excited about anime again, since I have always enjoyed reading her articles–though I admit having to catch up.  Fear not, my dear readers!  I have a tidy list of shows which I happen to be watching on and off.  You may expect some reviews in the near future.  Also, a few more for manga: Bartender, Break Blade, Fuyu Hanabi, Guardian Dog, Gunka no Balzer, and Hinekure Shisho no Mikaiketsu Jikenroku have caught my attention in particular.  I might have reviewed Break Blade already though.  I’ll check later. 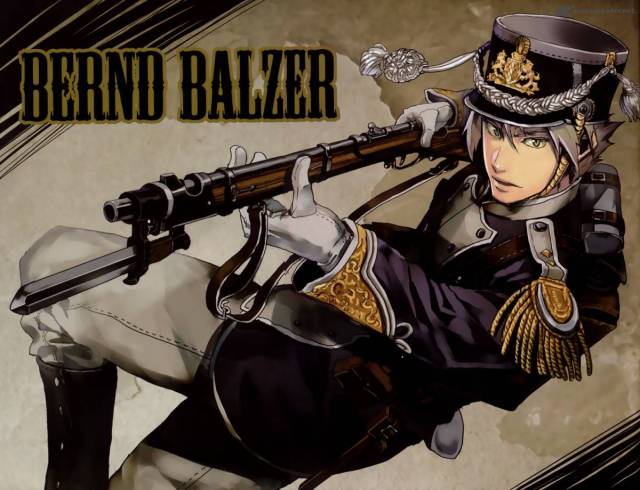 My favorite current manga for its dynamic characters, period detail, and political intrigue.

At any rate, Girls und Panzer and Future Diary provided excellent entertainment with the later raising some interesting moral questions.  I rather enjoyed both, though I admit to Future Diary being somewhat of an acquired taste.  At least, the points where I disagree with it furnish apt material for editorials.  Unfortunately, I can’t write anything else about Girls und Panzer besides what people have already written: it’s a unique show which excels at action.  Watch it! 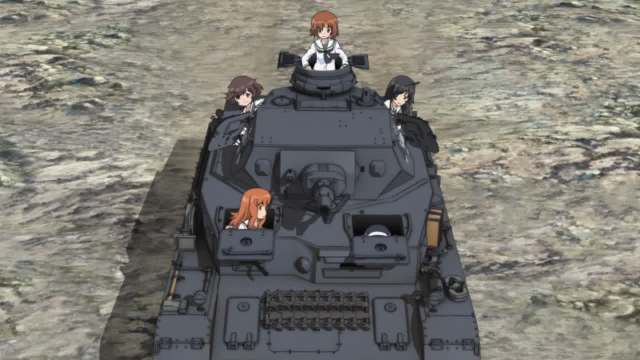 Who knew that a show combining high school girls and tanks could be so fantastic?

Having been intrigued by a review of Dusk Maiden of Amnesia written by Marlin-sama of Ashita no Anime, searching for a good comedy yesterday finally led me to watch it.  Three episodes into the show, the comedy has remained spectacular, the fanservice not over the top, and the overall tone wonderfully touching.  So, you can expect an article from me on the show in the future.  On a friend’s recommendation, I have started to watch the Break Blade movies.  As a fan of the manga, I was happy to see that they have kept the story faithful to the original story and that the animation is quite stunning.  Then, there are a couple of other shows which bloggers’ articles have led me to watch: Charles of Beneath the Tangles recommended Kotoura-san, and John Samuel of Pirates of the Burley Griffin’s series of articles on Bodacious Space Pirates drew me to watching that show. 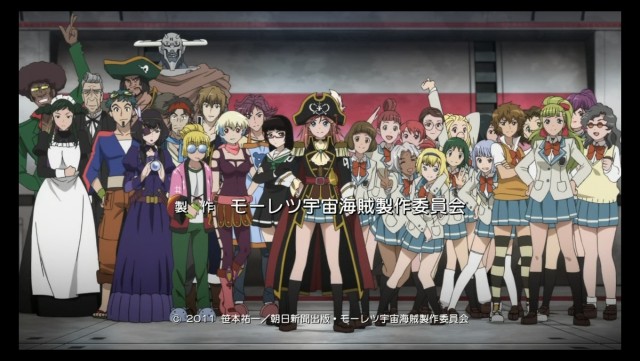 Then, there are a few others which I’m currently enjoying: Gintama, Hunter x Hunter, Inuyasha: the Final Act, Psycho-pass, and Ys.  Gintama rates highly among comedies, as its six season run attests.  It’s a rather frenetic show, going everywhere from high-class, dramatic series of episodes to episodes of low-brow toilet humor.  Sometimes I wonder whether a different show has insidiously taken Gintama‘s place.  I’m watching the original Hunter x Hunter, and just can’t seem to find the time to finish it.  If I did, I’d probably turn to the remake, which has received a lot of good press.  Inuyasha: the Final Act shows remarkable improvement from the original show in regard to animation quality, and I can’t wait to see the demise of Naraku in color.  Psycho-pass has frequently horrified me by the bloodiness of the crimes, and, in the last episode I watched, outraged me with the scene showing a brutal murder in a crowd with the onlookers merely spectating.  Yet, it offers an interesting view of human nature alongside its utopian society.  I should pen an article for it pretty soon.  Lastly, the fantasy Ys deserves a very harsh, mocking review.  It proves that not every anime from the 90’s is as good as I’d like it to be.  The characters’ actions are so artificial that it makes me feel like I’m watching video game cut scenes! 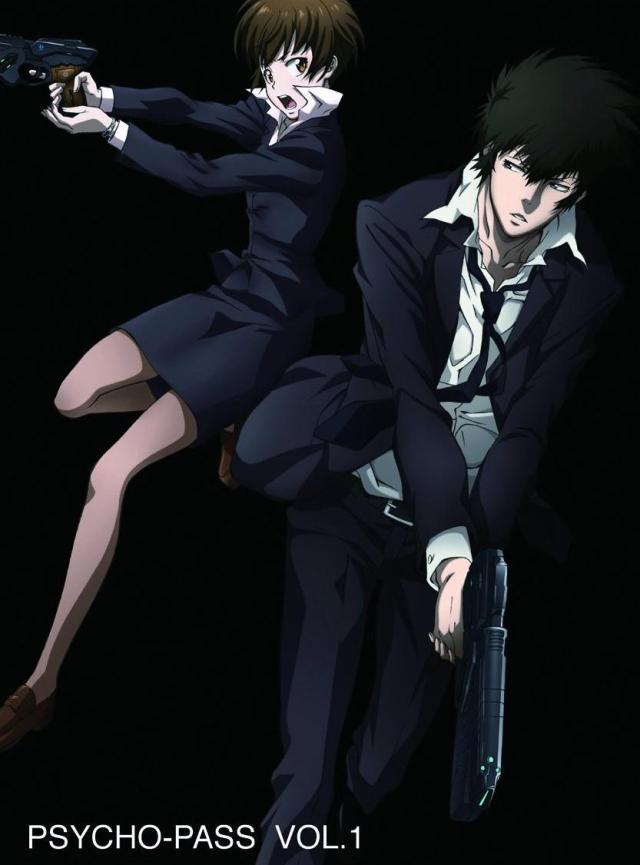 Oh, and I have also been watching Shin Sekai Yori.  That sums up my anime watching history over the past few months.  Look forward to some nice reviews!

Well, dear readers, I finally broke down and decided to watch Mirai Nikki due to my sister’s insistence.  I have seen about thirteen episodes of this well known series thus far, and find it rather enjoyable.  The first thing to strike me was how similar it seemed to Elfen Lied: the insane, pink-haired, crazed killer, many violent, bloody deaths, and the abnormal fighting abilities of the contestants.  Despite these similarities, there is a difference in mood between the two shows, which boils down to the variance with which they treat the concept of evil.  (I can see it all now: people who consider Elfen Lied a vacuous show are going to hate this article.) 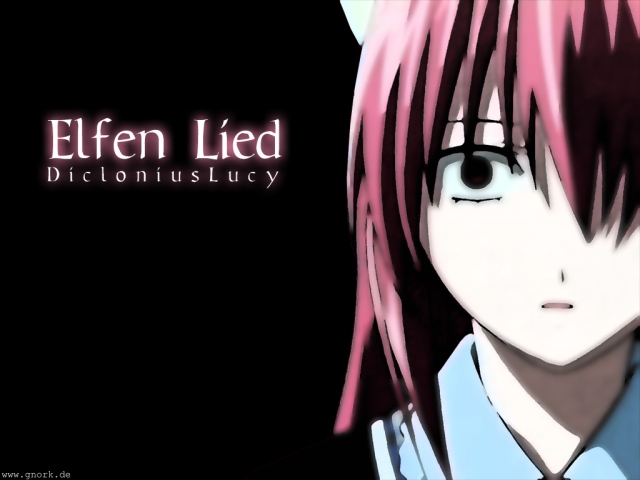 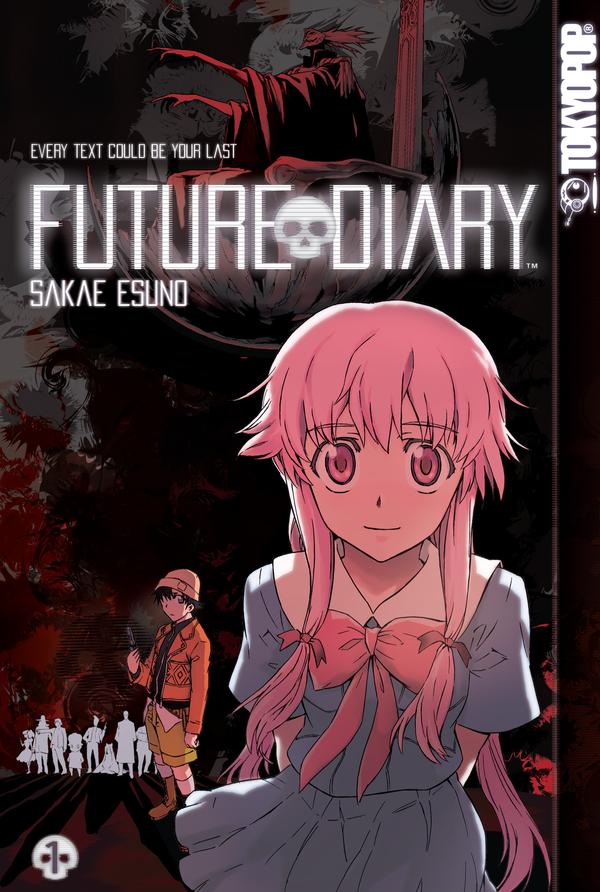 Haven’t you noticed this yourselves?  The plot of Mirai Nikki is centered around a game prepared by “the god of time and space” in which the contestants annihilate each other in order to gain the god’s title.  Creating the setting of a game does much to minimize the effect of the atrocious crimes committed therein.  All the casualties become pawns in a chess game.  This takes away from the impact of say killing scores of school children, taking invalids hostage, wretchedly treating prisoners, and even creating a twisted young child to be killed for the purposes of the game–I’m referring to a diary holder. 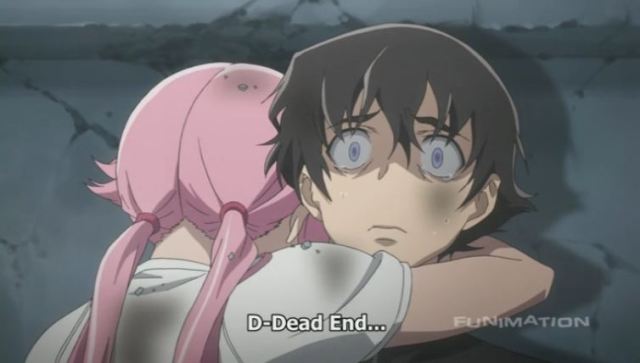 Conversely, Elfen Lied causes us to feel sorrow whenever someone is slain or even when they are merely struck.  The sinfulness of the action strikes us.  I believe this involves the fact that Lynn Okamoto was probably influenced by the religion of the Lutheran minister who wrote the eponymous poem.  So, we are struck by a sense of sin pervading the show.  Lives are lost; but, the wickedness of these acts are not lost on us, as they tend to be in Mirai Nikki.  So, the main divergence between the two shows appears to be religious: the Christian God in Elfen Lied–albeit, with the Lutheran conception of the depravity of man tainting the world–vs. the rather Assyrian god of Mirai Nikki, who enjoys playing with other people’s lives. 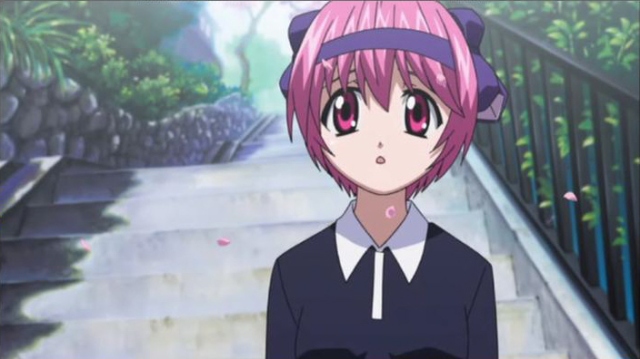 The curious case of #9, Uryuu Minene, offers the most striking example of how Mirai Nikki‘s world misunderstands the problem of evil.  We are introduced to this character as a monster who’s willing to sacrifice school children in order to achieve her goals.  To speak plainly, she’s rather loathesome, right?  Then, she fails in her object due to Yukiteru taking out her eye, she suffers greatly in making her escape from the police, and endures humiliation, pain, and betrayal from the “justice” besotted contestant (the conception of justice held by this character makes one fear for how the manga-ka views justice himself), and goes on to become perhaps the most likeable character in the show–at least, in my case.  (Could it be a perceived resemblance to Revy of Black Lagoon?) 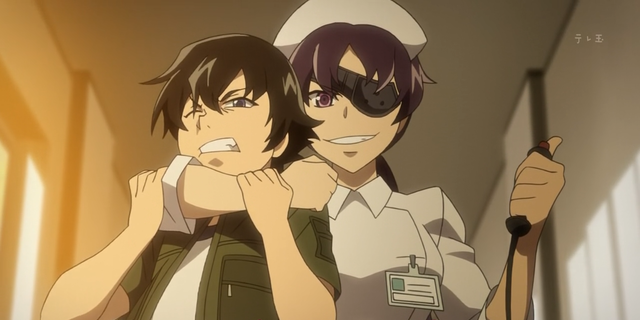 Then again, I might be reaching too hard or nostalgic for an old favorite. 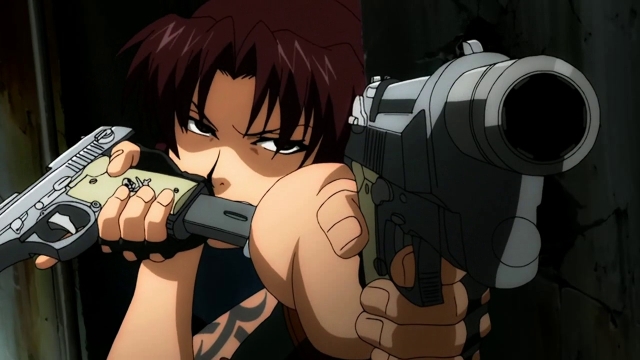 How is it that we can so easily warm up to a character who’s first shown us committing heinous crimes?  The suffering which followed her debut might be said to partially atone for her wrongs, but can they really be enough?  Her character even undergoes a change as she becomes level-headed, and we only rarely glimpse her maniacal smile.  And so, evil seems to result from insanity rather than malice.  We cannot really hold an insane person guilty, therefore no need for atonement. 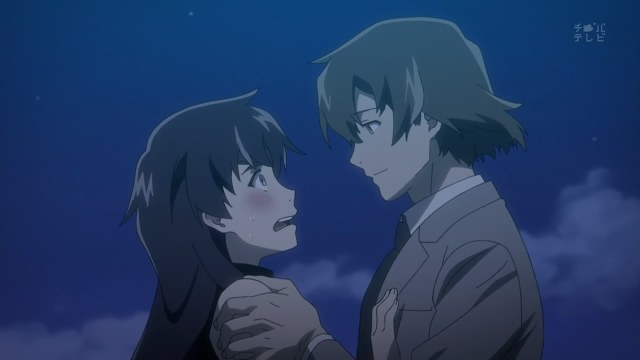 By the deep seated guilt of many of the characters, Elfen Lied acknowledges that, no matter what evil influences have twisted a person’s personality, they still sin by their own free choice.  This visibly taints their souls and places a burden of judgment upon them.  We, the viewers, sense this and develop true antipathy toward certain characters. 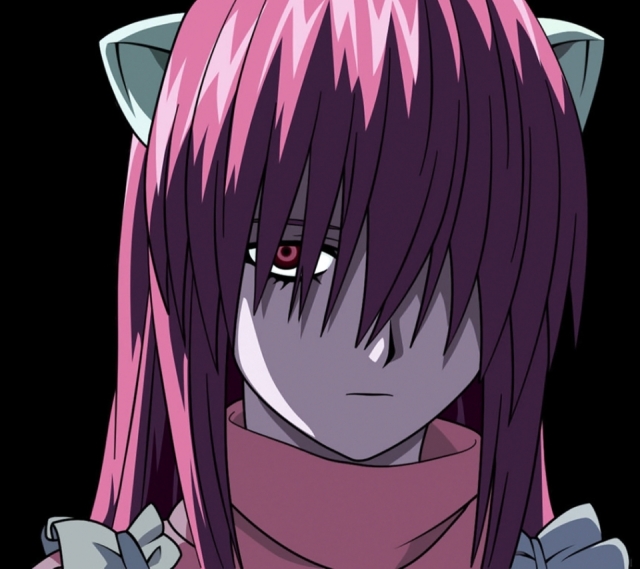 An exception to this rule in Elfen Lied is Lucy herself.  Her very guilt makes her sympathetic.  She would like to obtain forgiveness, and Kohta tries to give it to her.  However, Lucy knows in her heart of hearts that murder cannot be taken back, that the blood tainting her soul can’t be brushed aside or blamed on anyone else.  The only person who can erase such a thing is found in the lyrics of the opening song to that show: “O Lord, O Sacred Fire, have mercy!”  For God alone can forgive sins.  Excuses based on one’s mental state or tragic background don’t cut it. 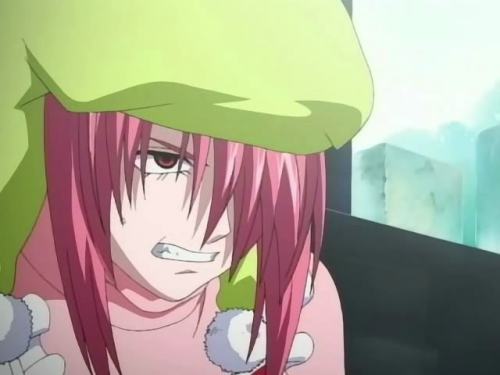 Ultimately, Elfen Lied‘s biggest failure in understanding human nature is the doctrine of total depravity which runs through the show.  But, it still knows human nature better than Mirai Nikki.  This makes it the better show of these rather similar works.  So, what do you think, my dear readers?  Which show really has a better perception of human nature and the mystery of evil?