I’ve tried twice to write the present article.  Neither scribbling quite satisfied me, and so I just decided to ramble and hope for the best.  Through the prayers of St. Ignatius of Loyola, whose natalis we celebrate today, may this ramble on the Communion of Saints benefit my dear readers!  Speaking of my dear readers, thanks to those who commented on my last article and made me think more deeply about the points I tried to make.  Your thoughtful observations rendered the comments section more interesting than the article itself! 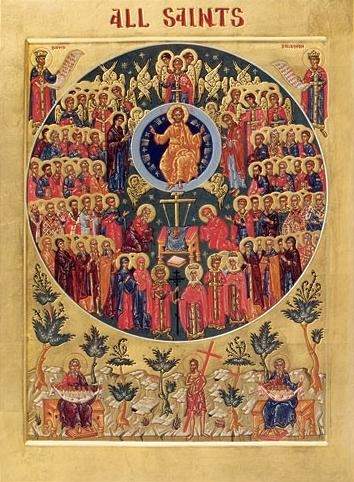 That the Communion of Saints keeps our eyes fixed on the King of the Saints, Our Lord Jesus Christ, may especially be seen in the life of St. Ignatius of Loyola.  Those familiar with his life know that chivalric literature influenced St. Ignatius as a youth to seek military glory.  His brave career as a soldier ended at the Battle of Pamplona, where a cannonball wounded him in both legs.  This led to a long period of recuperation and agonizing surgery, which he endured most manfully.  While convalescing,  he wished to read more books on chivalry, but was told by his caretakers that they place where he stayed only had the Bible and the Lives of the Saints.  He read these and soon found himself fired by the love of God and the desire to imitate the saints.  He wrote down the words of Jesus Christ in a red pen and the words of St. Mary in blue in order to make them a constant meditation.  Upon recovery, he forsook a life in the world in order to pursue one of prayer, fasting, and poverty.  Eventually, St. Ignatius founded the Society of Jesus, whose members, the Jesuits, stand as one of the most prominent religious orders in the Church. 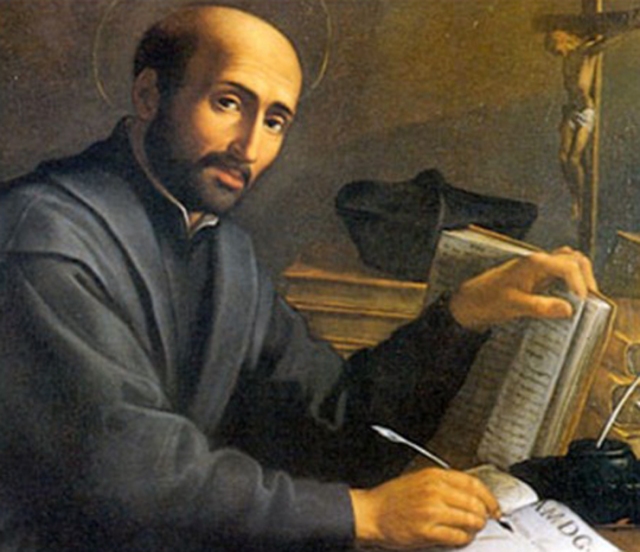 We, like St. Ignatius, are born into the world and find ourselves influenced by it.  It is very easy for us to become enmeshed in mere daily living and worldly desires.  The end result is losing all taste for religion.  After all, does not BIBLE stand for Basic Instructions Before Leaving Earth?  Heaven can wait.  We have decades before we need to meet our Maker!  We can put off prayer, fasting, and almsgiving for later.  A person with such attitudes has already been enmeshed in the world, and stands the chance of losing eternal life. 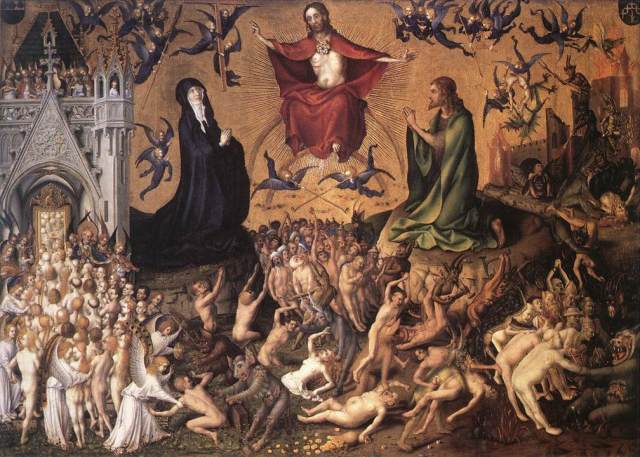 After St. Ignatius’ conversion, he never looked back.  The reason is because he took up the desires of the saints.  The saints’ desire for holiness and eternal life replaced his desire for worldly glory.  Though the latter part of his life was spent in society (Ignatius lived as a hermit for a short while), keeping mindful of God and the Saints preserved him from adapting the desires of secular persons.  As he writes in his Spiritual Exercises:

Man is created to praise, reverence, and serve God our Lord, and by this means to save his soul.

The other things on the face of the earth are created for man to help him in attaining the end for which he is created.

Therefore, we must make ourselves indifferent to all created things, as far as we are allowed free choice and are not under any prohibition. Consequently, as far as we are concerned, we should not prefer health to sickness, riches to poverty, honor to dishonor, a long life to a short life. The same holds for all other things.

Our one desire and choice should be what is more conducive to the end for which we are created.

Ignatius always remembered that he was a child of God with an eternal inheritance.  In comparison to eternal life, all else is dross. 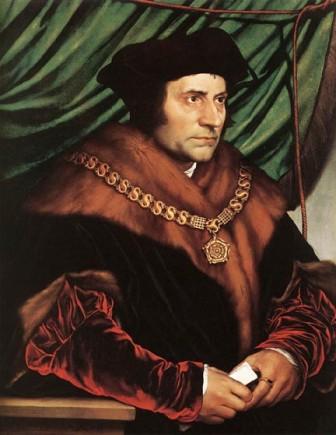 Though intimate with the King and noble society, St. Thomas More valued riches and status as nothing compared to God and the Truth. A great example of living in the world but not being of it.

The whole trick to living in the world but not being of it resides in remembering to which community we belong.  Though we love and respect our secular friends and wish for them to gain the same end we hope for, it is necessary for us to avoid falling into the same errors as they do–especially the error that religion holds no relevance to everyday life.  The words and deeds of the saints–and indeed the saints themselves–can be brought into our daily lives.  In our imitation of the saints, the charity and virtue we show may even be instrumental in drawing secular persons to our society.

May St. Ignatius pray that we all arrive where he and the other saints praise Our Lord through the ages of the ages.  Amen. 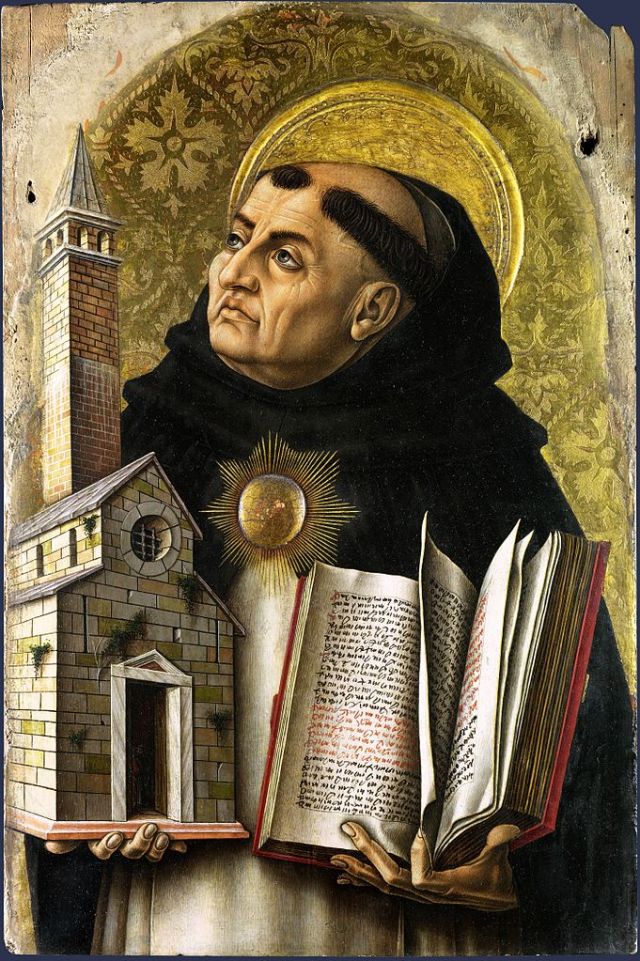 To use an example from Gokukoku no Brynhildr, Valkyria cannot reason from the beauty of the sunset, the tender kindness of Kuroneko, or the courageous rescue by Chisato to the infinitely beautiful, infinitely loving, and saving God.  Part of the reason Valkyria cannot reason thus lies in her being trapped in a world of evil: Vingulf’s laboratory which experiments on and tortures human beings until they expire or displease their superiors.  The belief that human beings hold intrinsic value stands as a moot point.  Chisato even frankly admits that all lives are not equal. 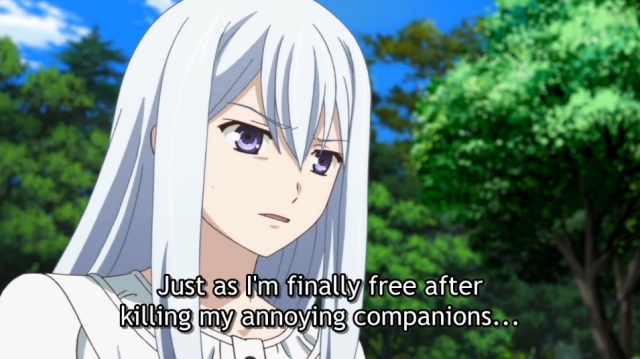 This causes a big problem for Valkyria.  Valkyria’s experience of goodness seems limited to Chisato and Kuroneko for the most part.  She loves Kuroneko because Kuroneko’s almost an exact clone of her, and she looks at Chisato as her god.  Instead of a God who calls every creature good and created human beings as the very image of himself, Valkyria believes in Chisato, who sees everyone and everything as either useless or potentially useless–except for his dead sister anyway.  Valkyria believes Chisato can do no wrong and follows him blindly. 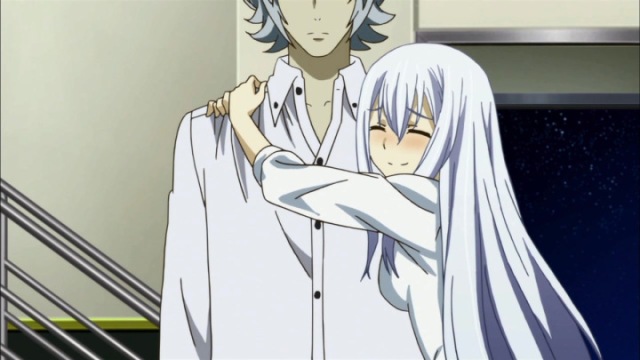 Her obedience even extends to killing Kuroneko, her other self.  She does attempt several times to dissuade Chisato from demanding Kuroneko’s death; but, when push comes to shove, she’s willing even to kill her twin for Chisato’s sake.  Thus, her limited perception of the good constricts to a solitary and morally corrupt individual.  Though, Kuroneko escapes death, Kuroneko might as well be an infidel with a fatwa on her head at that point. 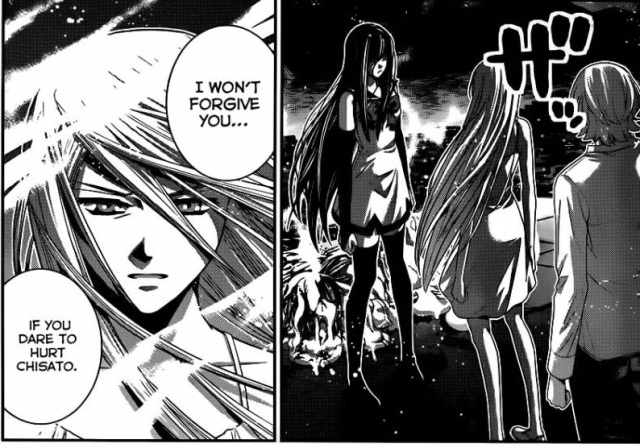 However, a pivotal moment occurs when Chisato dies while saving Valkyria one more time.  (The spark of divine goodness reignited in him at the end.)  Valkyria decides to annihilate the entire city and everyone in it at that point.  In her mind, the present situation is none other than Nietzsche’s proclamation on the theological state of the world–though with a slight twist: “God is dead…And you have killed him!”  Valkyria believes that Chisato was the sole good in her life.  Without him, she wants to destroy the entire worthless world.  Fortunately, Kuroneko defeats her, which leads to one of the most perplexing scenes in the manga. 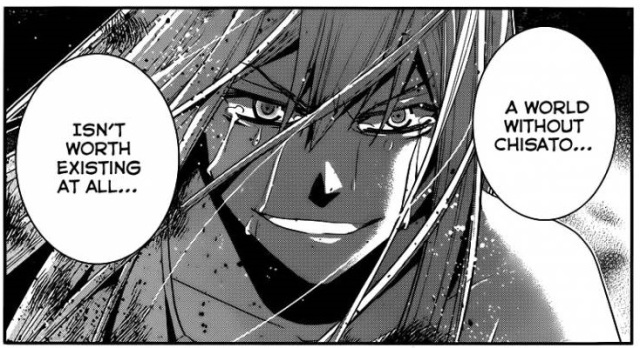 Upon her death, Valkyria sees Chisato one more time and pronounces his name before disappearing.   Are we to understand this as Valkyria’s salvation at the end?  (Elfen Lied, Okamoto’s prior manga, is patently Christian, and the same ethos is present in Gokukoku no Brynhildr, though more hidden.)  One wonders if it is really Chisato she sees–having been granted salvation though doing the greatest good one friend can do for another–or is it in fact Jesus Christ?  When we think of the genus savior, Jesus Christ stands at the pinnacle.  But, the only example of salvation Valkyria knew was of Chisato; hence, at the brink of eternal damnation, she could only recognize the Savior, who desires to rescue all souls from eternal death, as Chisato.  In light of the ultimate Goodness, the last movement of her soul is toward repentance for her evils–which must appear truly detestable in the full light of God–and toward love of God.  Thus, she is saved. 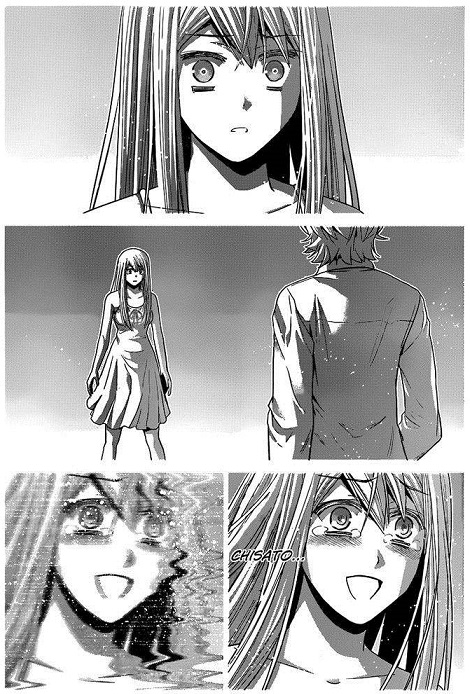 Would this movement of soul would be enough for salvation?  Love of the good which God placed in Chisato and which Valkyria could only recognize as Chisato?  As a Catholic, even if this were enough, I cannot but believe that her crimes would keep Valkyria in purgatory until the end of the world.  Though, the abyss of ignorance Valkyria has concerning God and goodness might indeed be invincible enough for Valkyria to escape the full penalty for her crimes.  May we all be so excused from our sins!

The thought came to my mind that people use times of joy and suffering in the opposite way from which they were intended.  During good times, we think that God loves us very much (as He does regardless of circumstances) and we grow more attached to this life.  During the latter times, we become vexed with God and groan and complain for Him to improve our lot.  Perhaps the thought crosses our mind that God hates us–an impossibility.  Rather, prosperity is not a sure sign that we are pleasing to God.  It might even be a sign that our lot is not with God but in this life.  On the other hand, St. Pio avers: “Suffering is the sure sign that God is loving us.” 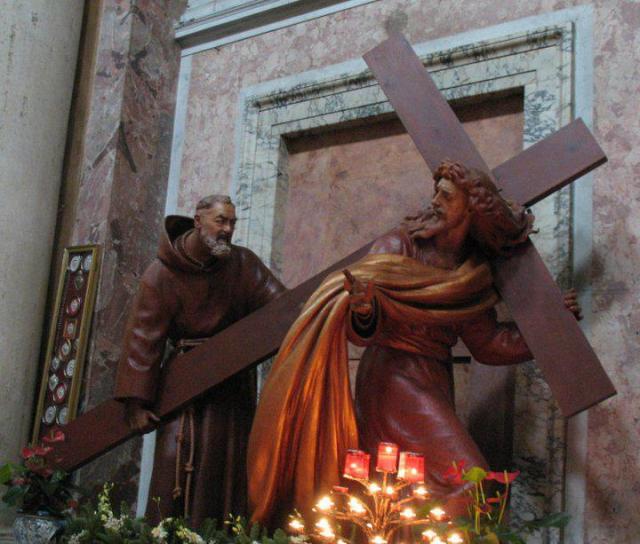 I mentioned in my article on Arpeggio of Blue Steel that God wishes us to be His friends.  If we look at human friendships, we might rate them as follows from least to greatest: 1) friendships of utility, 2) fair weather friends, 3) friends of long duration, 4) friends who remain friends in difficult times, and 5) friends who suffer with us.  Though God loves all of us infinitely–even those who actively hate Him, who can doubt that those who most perfectly share the cross of Christ must be considered best friends?  He wishes to transform those of mercenary temperament to serve him out of love, is pained by seeing the unwillingness of second group to stay with Him in suffering, looks with great fondness on those who stay by His side though weakly, is consoled by those who remember His Passion often, and who can describe the joy and pleasure He takes in souls that share in His Passion through suffering?  And so, when we suffer, we ought to be more inclined to thank God for these very sufferings than complain of them.  As St. Peter writes: “But rejoice insofar as you share Christ’s sufferings, that you may also rejoice and be glad when his glory is revealed” (1 Peter 4:13). 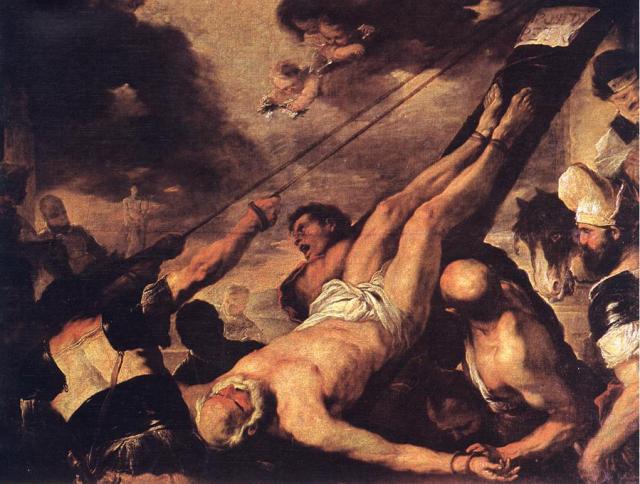 The whole purpose of prosperity is to prepare us to suffer.  We thank God for good things so that we might later be able to say with Job: “Naked I came from my mother’s womb, and naked shall I return. The Lord gave, and the Lord has taken away; blessed be the name of the Lord” (Job 1:21).  This time on earth is the most important time in our lives, but it pales in comparison to the eons we shall enjoy in the presence of God.  Such a long time is incomprehensible to us!  Everything good and beautiful here should lift our minds to the splendor and joys of paradise.  If the flowers and verdure of spring can give us such pleasure, how much more will paradise delight us with its beauties? 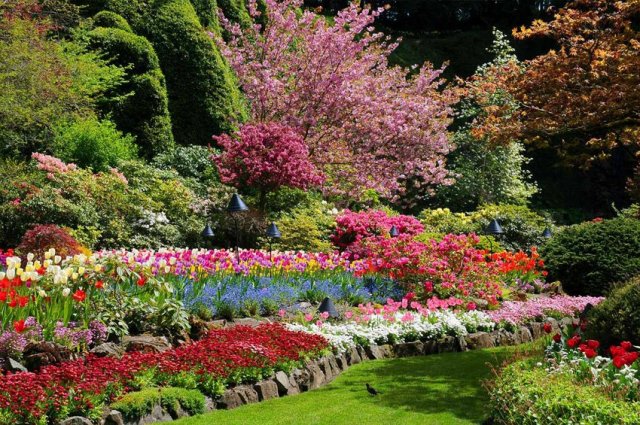 Lest the thorny and rocky path to this delightful paradise disquiet us, let us remember that path smooth and strewn with flowers but leads to the gaping maw of hell.  Even if we allow the storms of life to choke our faith, God will never forget the least moment we shared His sufferings.  Who can doubt that He shall shine the warmest rays of His Mercy on such a soul even to the last moment of life so that it might still attain eternal life in heaven?