Well, my dear readers, Akane ga Kiru happens to be the latest manga to capture my imagination.  However, the villains are downright fiends.  Some of the atrocities they commit make it easier to think of them as demons or monsters than human beings.  The violence often reaches the level of Hellsing (and the artwork of Akame ga Kiru is incredibly reminiscent of that work) and occasionally the level of the Berserk manga (don’t read that for Pete’s sake!); so, I only recommend it to the thickest skinned of my readers.  I find myself skipping pages and examining each page for foreshadowing of the gruesome so that I can avoid scenes reminiscent of the worst passages of Terry Goodkind’s novels. 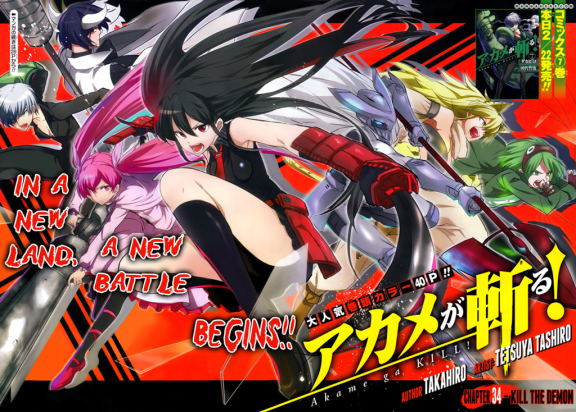 Then, why read Akame ga Kiru?  Any lover of dark stories will tell you that one reads dark stories for the light contained therein.  The surrounding darkness makes the light seem that much more precious and lovable.  If dark stories contain no light, they fall to the level of trash or poison—the product of a diabolical or melancholy imagination.

Speaking of diabolical, the attitude of treating people as cattle is pretty much rampant among the upper class of this society,

The point of light which seems most precious because it shines most precariously is romantic love in Esdese, our heroes’ greatest opponent.  Objectively speaking, she’s a vile sadist, but I cannot help but be fascinated by her–nay, she’s actually my favorite character right now.  Her desire to fall in love separates her from the majority of the villains.  And who else should she fall for but the hero?  During a tournament instigated by her to find the sixth member of her Jaeger team, Tatsumi steals her heart, and she drags him from the field in a manner reminiscent of a caveman claiming a bride.  They pass the night debating philosophy–Aristotle vs. Nietzsche, you might say.  Like Thrasymachus of Plato’s Republic, she claims that Tatsumi’s notion of justice derives from weak people: the strong only need to act to their own advantage.  All the while, Tatsumi tries to convince her to defect from the Empire and join the Rebel side without admitting that he has already joined the Empire’s most infamous enemy: Night Raid. 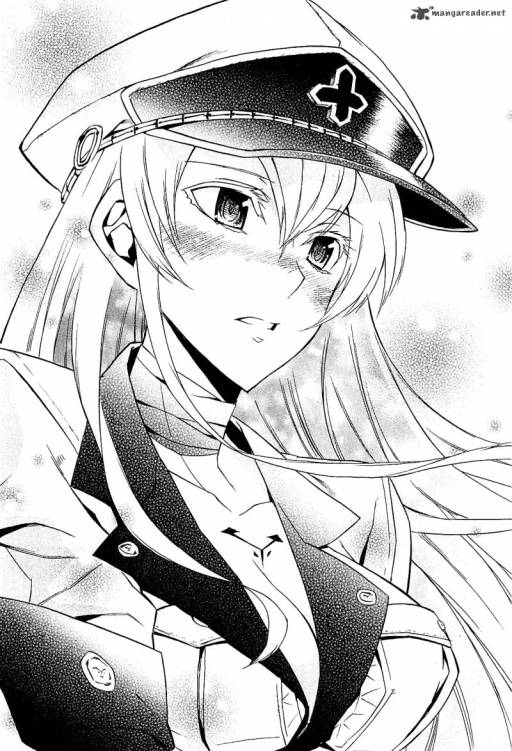 Esdese seems pretty cute until you get to know her.

During a hunting exercise, he escapes her grasp.  She tells the Jaegers that they do not need to offer Tatsumi mercy should they meet him in combat; yet, she still pines for him.  She even refuses the evil Prime Minister’s offer to find a similar man for her.

Why should this be significant?  Even bad people love others.  That’s natural, isn’t it?  But, love is intimately bound with happiness, the chief end of human beings.  If love were not so bound with happiness, the family would not be the chief unit of society.  The most effective governments try to foster the health of the family through fostering peace and justice.  Essentially, Esdese, by desiring love, also wishes for the flourishing of peace and justice unless she wants a sham love–the mere indulgence of her feelings.  If she opts for true love, she must become the enemy of her current employers.  (Oh, what a beautiful moment that would be!)  The rampant cruelty and injustice infecting the country hardly fosters the creation of happy households.

But, many things war against her defection: her vicious character first and foremost.  Her subordinates are incredibly loyal to her because she shows them affection; however, her show of affection is motivated by the desire to make them good subordinates, i. e. tools.  Aristotle claimed that the wicked can only have friendships of utility, and all of Esdese’s relationships belong to that category.  Her relationship with Tatsumi stands as the sole exception, but if she begins to view her relationship with Tatsumi according to usefulness or pleasure, that will shatter her ability to find real love, where the beloved is loved for his own sake.  Then again, the heroines have taken a shine to Tatsumi, and he could easily break Esdese’s heart by choosing one of them over her.  At which point, Esdese might forsake love altogether.  Thirdly, the Japanese concept of karma would certainly deny Esdese the right to real happiness.  The manga takes a grimly realistic view of humanity.  I’d have to say that Dostoyevsky’s underground man had a greater chance at salvation than Esdese.

In the meantime, I shall follow with rapt attention Esdese’s standing on the fence.  Shall she fall on the side she naturally leans towards and snuff out the little bit of light in her soul?  Or shall amor, with all its demands, sacrifices, and true joys, truly omnia vincit?