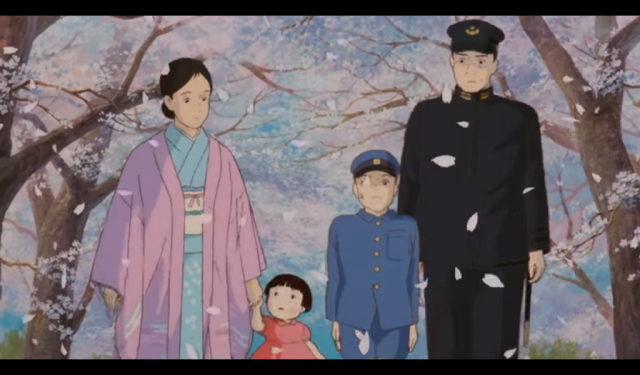 Deliberately targeting civilians is repugnant to the rules of civilized warfare.  The Germans and the Japanese were the first to engage in barbarous warfare like that, which made them liable to suffer the same fate.  Did the enemy’s use of barbarous methods of warfare justify the Allies retaliating in kind?  One might ask how the Allies could win against an enemies like Nazi Germany and Tojo’s Japan by strictly adhering to the rules of war: how can one win against a cheat if one cannot bend the rules oneself?  Those are important arguments in favor of the Allied firebombing campaigns; but, I still think that it’s wrong and dangerous to make civilians the primary targets of military action.  It can be the first step to erasing morality from war altogether.  Still, few nations so eminently deserved such treatment as Germany and Japan during WWII.

Grave of the Fireflies shows the human cost of violating the civilized norms of warfare.  Seita and Setsuko lose their mother during a firebombing of their home city.  From that point, they cast themselves on the charity of their mother’s sister.  The two children wonder whether their father, a sailor aboard the Japanese Cruiser Maya, is alive.  The USS Dace torpedoed this vessel on October 23, 1944, and we can only assume that their father was one of 479 crewmen aboard the Maya killed during the Battle of Leyte Gulf.  That they are orphans make their aunt’s complaints about them not helping the Japanese war effort particularly odious.  The orphans of war dead are owed some kind of care by their relatives and society.  Whatever sacrifices the aunt’s immediate family is making, they cannot equal the sacrifice of Seita’s father’s life.  One is unsure whether the government or the orphans’ mother concealed the fact of their father’s death, which should have earned them compassion.

Instead, the aunt emotionally abuses the two of them, makes them exchange their mother’s kimonos for rice, and ultimately throws them upon their own resources–save that she allows them to live at her house.  Fortunately, Seita and Setsuko’s mother left a bank account with ¥7,000 yen, which would have equaled $1,610 USD at the opening of the war.  (To help conceptualize this better, that amount of American dollars has the purchasing power of $28,149.19 USD in 2018.)  However, severe inflation would have made this money worth far less in 1945, and we can’t estimate it’s value during that year.  When the yen was artificially stabilized in 1949, ¥7,000 would be the equivalent of $19.44 with the value of $198.86 in today’s money.  That does not go very far!  It also helps explain how frugal Seita is with this money.

In fairness to her, their aunt wasn’t that bad to begin with, but progressively became worse under the stresses of rationing and bombing raids.

Despite how mean their aunt is, one has to regard it as a tragic mistake that Seita and Setsuko left her house.  As wicked as she was, one cannot imagine her allowing Setsuko to die of malnutrition–something Seita tried to prevent, but was a moment too late.  (That was really sad to see.)  Nor would Setsuko have been subject to the bloodsucking vermin infesting the bomb shelter and leeching out her strength.  Though I say that leaving their aunt’s house was Seita’s tragic mistake, most of the blame goes to his aunt and guardian for not preventing them from leaving.

The unfortunate effect of this was for Seita to undertake Setsuko’s guardianship while he was far too young.  Setsuko’s welfare became Seita’s sole purpose in life.  When his purpose died, Seita himself dies.

Many men waste away without a purpose in life.  They either kill themselves outright or anesthetize themselves with drugs, alcohol, or tobacco unto an early death.  The only way they can continue to live in the dull waste land of the world is by numbing themselves with drugs.  Instead of drugs, Seita imbibes a draft of misery to the dregs and succumbs to taedium vitae.

Which brings me to the ultimate tragic flaw of Seita’s life: he made Setsuko his God.  Once his mother died, the purpose of his existence revolved around keeping Setsuko alive and happy.  You are right to say that he owed her sustenance, shelter, and emotional care, especially since he made himself her guardian; but, it is a sin for a man to take another man as the final end of his existence.  It does not matter whether the object of adoration is a dictator or Setsuko: both are case of idolatry. 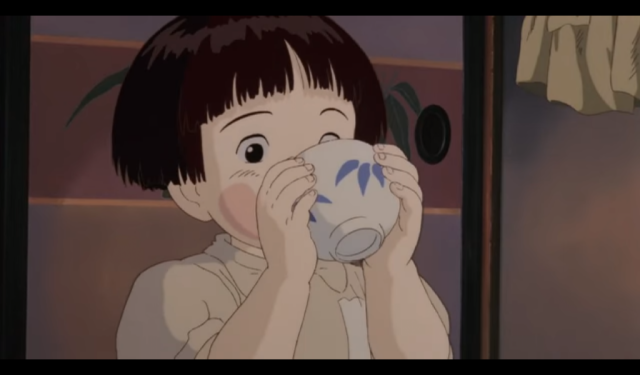 Usually, people’s lives are filled and layered with meaning and lawful ends.  The lawful ends tend towards meaning, and meaning helps us towards the end of happiness.  People have jobs, friends, family, hobbies, pursuits, religion, politics, study, etc.  But, only God can be the true final end, because only God is eternal, non-contingent, and capable of enfolding all other ends.  There is not one good or useful action which one can not do for the love of God: one can even eat or sleep for the love of God, because we need a healthy body to do various good works.

Aristotle described the final end of man as happiness.  The Greek word Aristotle used for happiness is ευδαιμονια–literally, “good spirits.”  But, Aristotle’s idea of happiness, despite how much he tries to anchor it to a life of virtue, is changeable: we are happy today, sad tomorrow, and may fight adverse conditions or feelings for weeks, months, or even years before we feel ourselves happy.  Christians perfected the idea of happiness by defining the final end and highest good for man as beholding the face of God united in friendship with Him.

Nothing so underlines Seita’s idolatry as him only seeing Setsuko when he passes on.  He’s not joined with his mother, father, friends, God, or any other person besides Setsuko.  He essentially defined happiness as “seeing the face of Setsuko.”  But, Seita’s life had value irrespective of Setsuko’s existence!  Why could he not live for any of the other suffering people around him?  Aren’t we all part of one human family?  He had a duty to survive!  It’s a shame that Seita was either not trained to know this or had his soul so crushed and warped by tragedy that he lost the will to live.  We must profit from his error lest we fall into the same fault of tragedy overwhelming our sense of purpose in life. 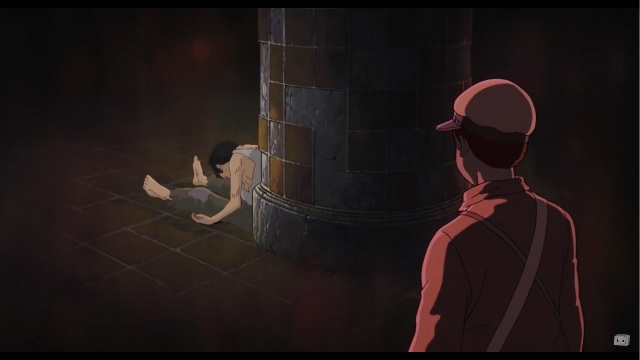 Well, that was a long discourse on the themes of Grave of the Fireflies.  The animation and characters deserve praise also.  I’m not a fan of tragedies, but this tragedy has some worthwhile ideas imbedded in it.  And so, I’ve reversed my initially more negative rating to a rating of…