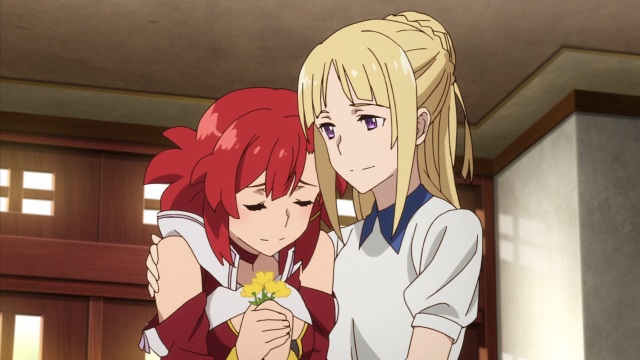 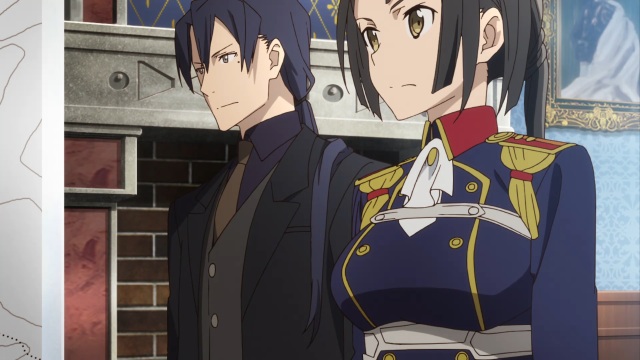 This show successfully combines elements from Strike Witches and Maria the Virgin Witch.  It provided us with two of the best heroines from this season.  (Only Kyouka of Bungo Stray Dogs struck me as a better heroine because of her greater moral struggle.)  The action was top notch, and all the WWII vehicles very realistic.  Aside from the magic, only a few moments in the show struck me as unrealistic: things like soldiers being able to provide Izetta with shorts while on campaign and Germanian guards being armed with Lugers rather than Mausers or MP 40s.  In other words, the show seldom rocked me from my suspension of disbelief.

Basler was my favorite character in the show: I have a soft spot for good Germans in WWII films. 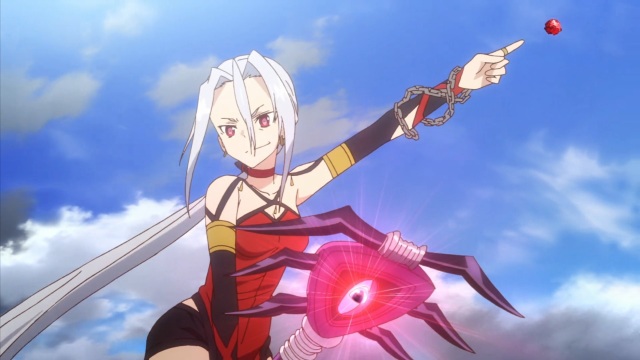 Though some people did not like the inclusion of the witch Sophie towards the end, her advent made for some interesting conflict and challenges for Izetta.  Sophie herself was quite a compelling character.  I can’t help but feel that they induced needless complications into Sophie’s backstory by making the king betray her for the sake of the country and the queen sorry to hand her over to the Inquisition.  The simple fact is that people are not forgiving towards the seducer of their spouse, except in the case of very rare individuals.  Should such a kind person exist, it is hard to imagine them turning the seducer over to certain death.  In the case of the king, why ennoble an adulterer?  The twists added to the tale don’t really succeed in exonerating the monarchs for betraying Sophie nor do they make her look any worse.  Sophie’s crime, purely and simply, is trying to exact revenge on innocent persons, which is horrible enough in and of itself.

Here is a series for anyone fond of classic novel.  Watching this made me wish that I had read more Japanese literature.  I’ve read something by the following authors: Natsume Soseki (the Father of Contemporary Japanese literature who has but a brief appearance in season 2), Ryuunosuke Akutagawa, Jun’ichiro Tanizaki, Yasunari Kawabata, Shuzaku Endo, and Yukio Mishima.  The last of three of them were sadly absent from Bungo Stray Dogs.  (Correct me if I’m wrong.)  Apparently, Yukio Mishima’s family has generally barred animation studios and mangaka from using this ardent nationalist in their works.  Mishima’s works are dark, macabre, and generally disturbing, but fascinating nevertheless.

Speaking of disturbing, I love that they included Lovecraft as a non-human character.

At any rate, the ambiance and the characters sucked me into the first season.  I’m one of those persons who likes stories which mix comedy into gritty scenarios–probably the result of watching so many WWII movies as a child.  (If you were wondering, yes, I’m a fan of Akame ga Kiru also.)  Both during this season and the prior one, Bungo Stray Dogs was what I most looked forward to watching each week. 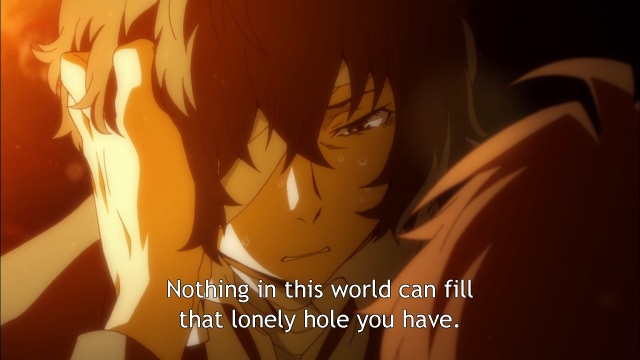 Taken in isolation, the four episode flashback counts as a masterpiece–★★★★★, and iblessall’s article on them deserves a reading if you have not done so.  I was tempted to split the difference between the flashback and the main plot, but the second season does not strike me as quite deserving four and a half stars.  I still thoroughly enjoyed it from start to finish and am looking forward to season three. 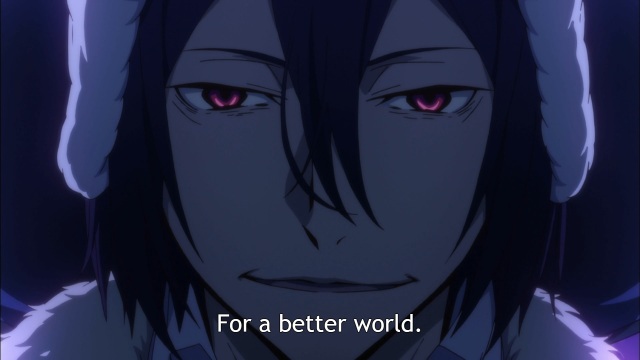 At least, there had better be a season three after they introduce a character based on my second favorite novelist, Fyodor Dostoyevsky.  The teaser at the end ironically portrays an F. Dostoyevsky who stands for everything the real Dostoyevsky fought against: the nihilistic anarchist.  As cool as the second season was, I can only imagine a third season with Russian authors would blow the second season out of the water. 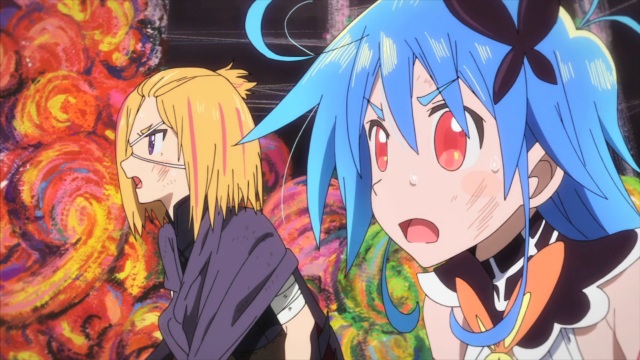 To think that the show I watched on a whim comes out on top this season!  The first episode wowed me in how it’s animation felt like a fortunate combination of Trigger and Studio Ghibli.  The latter resemblance soon wore off, but its animation still offered the most immersive experience of anything this season.  The action and the tension between the heroines also kept me tuned in.  At the end of the show, I found myself surprised at having enjoyed a magical girl show so much.  Looking at my Anime-Planet profile reveals that I have only watched four shows in the genre, and Princess Tutu naturally comes in first place.

The dynamic between Cocona and Papika reminded me of a passage from Dostoyevsky’s “Notes from the Underground,” where the narrator says that a truly intelligent man would never do anything while a man of action is necessarily stupid.  One always strives for a happy middle between the two: not so brainy as to question everything nor so stupid as to lack prudence.  Yet, the curious thing about finding one’s place in the world is that one finds it more easily by action than by thought.  As the Underground Man declares: “Now, I am living out my life in my corner, taunting myself with the spiteful and useless consolation that an intelligent man cannot become anything seriously, and it is only the fool who becomes anything” (Part I, Chapter 1).  The world is too full of doubts, obstacles, and fears for one to consider them all. 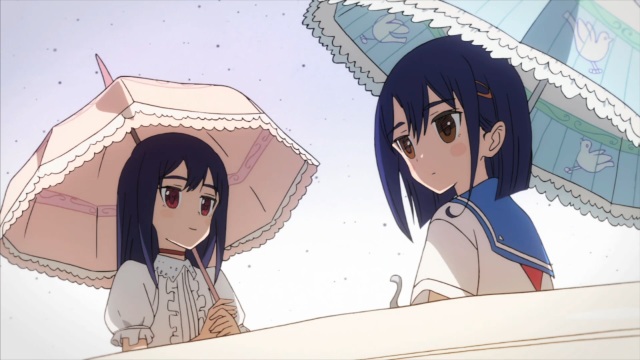 This was a coming of age tale, and the mother of Cocona, Mimi, reminds me of a particular mother in C. S. Lewis’s The Great Divorce.  Apparently, this mother formed such a great attachment to her son that it was best for the son’s salvation and for hers that he pass on early in life!  If he had not died, she would have mollycoddled him into spoiled milquetoast.  That was the greatest threat posed by the over-motherly half of Mimi, and it was interesting to see the anime bring up a similar conflict. 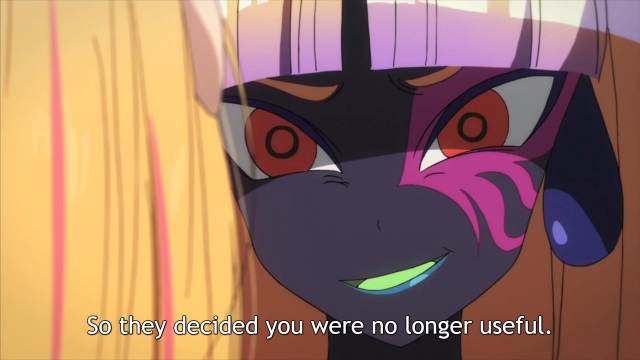 With such food for thought, good animation, and likable characters, I could not but love this show even if the episode plots often felt confusing and sometimes pointless.  Plus, the ending song struck me as the most unique of the season.

What were my dear readers favorites?