My latest article on Beneath the Tangles talks about why Latin became the Franca lingua of the Middle Ages, and about how the Catholic Church preferred–and indeed, still prefers–this language above all the rest.  This topic and the last one I wrote about, monastic contributions to European economics, Isuna Hasekura gets very right. 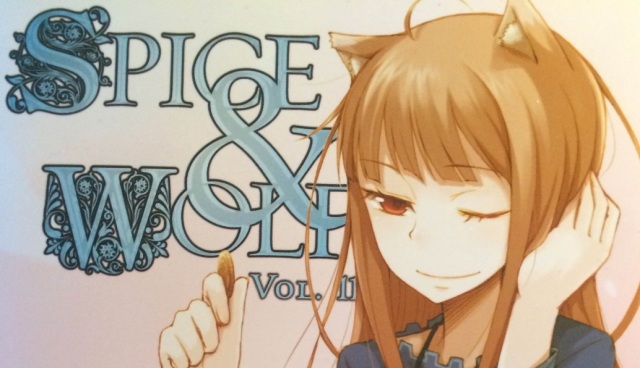 I’ve heard of this anime. Jusuchin gives an excellent review of this episode length OVA. It sounds pretty cool overall, and I hope that they manage to make a series out of it–though, I doubt that it comes close to being like Ghost in the Shell.

A Journey Through Life

The result of a crowd-funded campaign, Under the Dog was originally envisioned as a 26 episode series with an animation style hearkening back to shows like Ghost in the Shell. The plot follows an UN-sanctioned assassination group called Flowers, made up of young teenage girls who have special abilities formed after a massive terrorist attack occurred during the 2020 Tokyo Olympics. Failure of a mission means death for the agent, as well as family and close friends through the use of implanted bombs. I mentioned Padre Pio in my last post. We fortunately have many quotes and stories about him because he’s a very recent saint (d. 1968). Many people who knew him are still alive! Here is a collection of twenty-five quotes of his. All are very encouraging.

St. Pio of  Pietrelcina was a humble friar whose holiness and patient suffering won many souls for Christ. Pope Benedict XVI said he “‘prolonged’ the work of Christ: announcing the Gospel, remitting sins and healing the sick in body and spirit”. Here are twenty-five quotations from this much beloved saint illustrating his wisdom, humanity and deep spiritual insight.

In the uproar of the passions and of reverses of fortune, we are upheld by the comforting hope of God’s inexhaustible mercy.

Jesus is with you even when you don’t feel His presence. He is never so close to you as He is during your spiritual battles. He is always there, close to you, encouraging you to fight your battle courageously. He is there to ward off the enemy’s blows so that you may not be hurt.

God leaves you in that…

Welcome to a suitably random series of quick takes, as you can tell from the first topic.  Those who wish to read a random assortment of things about yours truly are encouraged to continue.  Which reminds me, there are two award posts I should do in the near future from Josh W and Lynlynsays.  Look forward to them!

I’ve determined that my favorite method of brewing coffee is the Turkish method: stirring very fine coffee grinds into some water, simmering it for five minutes (I try to keep it between 195 and 205 degrees Fahrenheit), and then stirring before pouring it into a cup.  My grandmother uses this method, though I never employed it myself until the past month.  One interesting thing about this method is how one can stir up the grinds on the bottom of one’s cup to heighten the flavor.  The end result is very strong–especially with the Death Wish Coffee (the most caffeinated coffee in the world) I’m using now.

END_OF_DOCUMENT_TOKEN_TO_BE_REPLACED

While watching Berserk (2016), one cannot but be struck by how much evil exists in that world.  In that way, it imitates our own world, where every depravity has been committed at least a thousand times over.  Most figures in the story strike one as villains or mindless drones.  Few are like Guts in taking a stand against the forces of evil.  Decent people are mostly powerless against evil, and the majority only want to save their own skin–even at the expense of another’s life or hundreds of other lives.  This anime provides as bleak a picture of humanity.  Even death does not provide rest, as souls swallowed by demons remain trapped in their anger, hatred, and despair.

But, I repeat that this world is much like ours: there is even the presence of grace though characters deny the efficacy of prayer and claim that only deeds count.  The concepts of grace and providence apply more to Nina than any other character.  Her surviving merciless soldiers, monstrous executioners, a fall of several stories, an ogreish inquisitor, and an army of infernal blob demons can only be considered providential and gracious.  Did she deserve it?  No, all her actions are selfish and call for punishment, from her clinging to life at all costs and participation at Satanic orgies to her consistent betrayal of associates and friends.

END_OF_DOCUMENT_TOKEN_TO_BE_REPLACED

The latest episode of 91 Days inspires this topic, especially in light of what happened at the end of that episode.  Angelo has lived without purpose for the seven years following the murder of his family.  He exists in a cheap apartment with no signs of individuality and makes a living through theft.  He constantly thinks about his one great treasure, his deceased family, and has no desire to really live.  This makes him easy to manipulate as Angelo becomes embroiled in the power struggle within the Vanetti mob.  While he shows himself resolute, resourceful, and tough, he soon becomes a pawn barely able to exercise his own will.

The above shows the importance of having a personal philosophy and of being true to oneself.  Indeed, one cannot ever be true to oneself without some personal philosophy.  The most warped mindset is that of relativism, and the relativist stands as the most miserable of all men, because his stance changes with the zeitgeist.  In terms of mindset, a racist imperialist is superior to a relativist.  Sure, it’s an awful thing to judge other men purely on external characteristics and to support a program of conquest for the benefit of the fatherland.  But, the relativist can morph from a classical liberal to a socialist to a monarchist to a democrat depending on what the majority prefers.  In England, the relativist abhors female circumcision; in Indonesia, he deems it a cultural practice worthy of toleration.  Contention and ostracism are feared above all.  At least, the racist imperialist has objective standards which he is willing to fight for.  Also, because he has objective standards, the racist imperialist can be convinced that his objective standards are not true and be brought closer to the truth.  The relativist blows with the winds of expediency.

END_OF_DOCUMENT_TOKEN_TO_BE_REPLACED

Here’s a great endorsement of the Project Itoh novels, while at the same time detailing why the Harmony anime falls short of the novel.

This summer hasn’t been kind enough to leave me with as much time as I’d like to watch/read/write about anime – with the passing of Labor Day and the gathering momentum towards winter, I’m not complaining, just explaining why it’s taking me almost two months to respond to a piece one of my favorite blogs wrote. The blog – Medieval Otaku – wrote back on July 25 this post: “Interest in Project Itoh: Empire of Corpses, Harmony, and Genocidal Organ”.  In it, he links to a very enlightening Youtube video and asks if anyone was interested in the noitaminA produced animated movies of Project Itoh’s books.

Of late, I’ve been hankering to write a less formal blog post than the essays posted recently.  I’m not sure how many of my dear readers remember Nami, but she’s the blogger who introduced me to Quick Takes, where one simply rambles on seven things which are on their mind.  You can count this as a mid-season review if you will, though I’ll be talking about a 90’s anime as well.  Without further ado, let’s proceed!

The new anime adaptation of Berserk surprised me by not revolting me from episode one.  (The manga succeeded in doing that by the time I reached the halfway mark of volume one.)  This series is causing me to modify my opinion that only the Golden Age arc was worth an anime adaptation.  Still, I find myself skipping the most unsavory parts of the anime.  (Similar to how I read Akame ga Kiru.)

END_OF_DOCUMENT_TOKEN_TO_BE_REPLACED

Jeko Jeko has written some insightful articles over the past year, and so I’m happy to see that UEM! is growing. Be sure to subscribe, even if you can’t donate.

When I started this blog, back in the summer of 2015, it was an offbeat idea I had to keep myself busy with something other than the revision I should have been doing. It was my first real venture into the many communities of anime lovers online. Over the year-and-bit that’s passed, I’ve made many friends, and annoyed a few more people than I should have with my endless rambling about why we need to question what makes anime, and all art, ‘good’. I’ve made so much progress as a blogger, and it’s all thanks to you guys.

Among the readers I’ve picked up, some fantastic conversations have been made. Some of the best have come from more recent articles, posts that are more than just elaborations of opinions. I’ve been tapping into wider reading and research, into theories about art and how we appreciate it, old and new, to…

Well, I finally have my list of anime recommendations for Christians up.  I expect to continue working and updating this page over the months and years, but plenty of great anime are posted there.  You’ll find this new page as a sub page of “About Me and This Blog.”  Feel free to recommend more anime which you feel might belong up there or if you want to contest the way any anime has been categorized.  (You’ll see what I mean when you read it.)

Here is the first post for my new column on Beneath the Tangles.  The next eight posts will be covering the rest of the Spice and Wolf light novels.  This first article initiates the reader into what the main theme of the series is alongside my commentary on it.  I can’t recommend Spice and Wolf enough.  The only downside is the sour view Isuna Hasekura takes on monotheism; but I can forgive a Shintoist that, and it should make for some interesting articles later on.

I hope you like this article, which is linked to below.