Here is the article I promised on magic in anime, which will especially focus on Flying Witch.  My arguements proceed from several premises, developed from Catholic theology and my years reading fantasy fiction, which I shall list here: 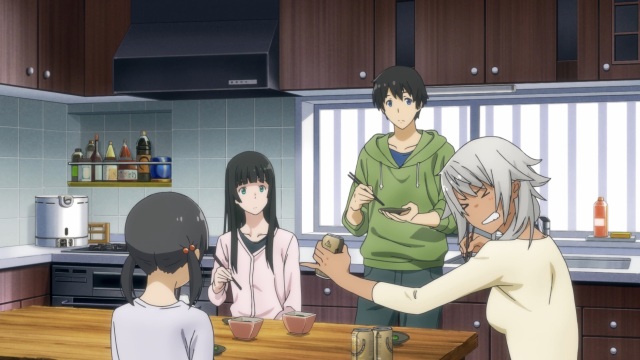 From those five points, you can already see the writing on the wall for Flying Witch; so, let me start by giving two good examples of the presentation of magic in fiction.  The first example is the American animated movie The Swan Princess.  The villain Rothbart (excellently played by Jack Palance) is an evil sorcerer bent upon gaining the kingdom of Odette’s father by any means.  He uses magic in order to manipulate people and events toward his vile ends.  Here, it hardly matters that the magic is quite fantastic and unrelated to the occult.  If Rothbart’s magic were more closely related to the occult, it would have made for harder viewing no doubt, but Rothbart’s very villainy shows the wickedness of magic in itself.  This presentation in nowise distorts the viewer’s morality as to the nature of magic.

I claim Slayers as the second example, because of how outlandish the magic is.  (Feel free to debate me on this choice.)  The words of the Dragon Slave spell are troubling when one pays attention to them, but you won’t find teenagers attempting to cast Dragon Slave except as play acting.  Most of the other magic, which relies upon saying a single word and drawing upon an inner font of magical power, is also obviously fantastic, not having any cognate to occult practices.

So, what has Flying Witch done wrong?  Though set in the real world, it stands as a work of fiction, which does give it some leeway.  However, it mimics real life occult practices (spells with the pentagram, fortune telling, and magical items/potions) and lends them a favorable air.  It even lends a favorable air to the witches themselves by making them very attractive–contrast that to the bald Rothbart!  I am afraid that certain youths, not grounded in ethics and theology, might indeed be intrigued into entering the occult by this series–like Chinatsu, who swiftly moves from fear of magic to becoming an enthusiast for it.

A similar phenomenon occurred following the publication of Harry Potter and the Sorceror’s Stone.  Many young people were moved by the books to dabble in the occult.  Pursuant to a school project on the book, yours truly even read about famous wizards and sorcerers.  Thankfully, my research going far beyond the intended scope of the project led to an embarrassment which killed my desire to pursue occult history further.

Young minds are terribly eager for new knowledge, even if this knowledge turns out to be the endarkening of the intellect–think of it as similar to advancing in the study of pornography.  No doubt, watching Flying Witch will produce no harm in those viewers with solid morals; but, it might have the unhappy effect of ruining the morality of certain youths in regard to magic.  The show itself seems to lack any notion of morality except for an all-encompassing “niceness.”  Christians ought to impress on everyone the understanding that all forms of fortune-telling, spells, seances, potions, the Ouija board, spiritualism, and all manifestations of the occult ought to be strictly forbidden.