Here is a very solid lineup of movies for the BFI Anime Weekend. Many are worth adding to the list of anime one want to see.

The BFI is hosting a weekend of contemporary anime films at the BFI Southbank in June. This is a regular event which collects a diverse array of anime movies and a lot on offer in this year’s programme are some of the best and flashiest to be released in recent years. 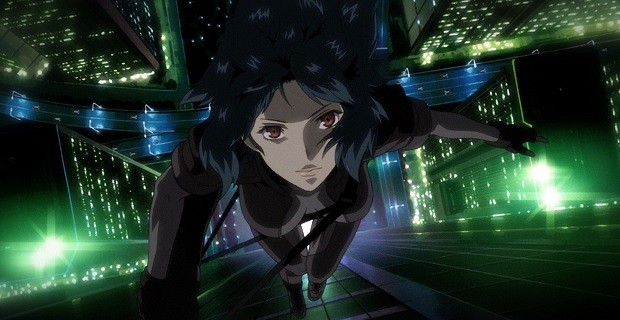 The past couple of years have introduced us to one solid season after another.  (It reminds me of the days where I despaired of the anime industry, which lead to posts like “Anime Spring Season 2012: Only Two Worthy Shows?“. Click on that if you want to read a really old post!) This season was no exception.  So, I limited myself to seven regular length shows lest I become overburdened.  (I’m not concerned about shorts taking up too much time.) See below for the shows which made the cut.  The shows are in no particular order.

The first two episodes greatly amused me, and I found myself surprised by the serious turn taken in the third episode.  Trigger is nothing if not creative, and I can’t wait to see how they meld the insane antics of this show with the more serious elements.  Fans of Kill la Kill will no doubt see similarities between Luluco and Mako Mankanshoku.  Having a Mako-ish character as the heroine ought to make for a very memorable short.

END_OF_DOCUMENT_TOKEN_TO_BE_REPLACED

Here is a little reflection I wrote on the topic of Holy Communion. 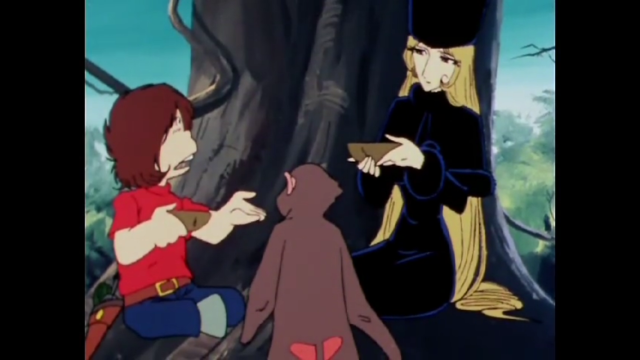 Pondering the examples of other bloggers, particularly those at Beneath the Tangles, has encouraged me to create a page devoted to anime imbued with Christian ideals.  Many bloggers will tell you that there are no Christian anime besides Superbook and My Last Days, but I beg to differ.  Five other anime come to mind which have a clear Christian ethos behind them:

END_OF_DOCUMENT_TOKEN_TO_BE_REPLACED 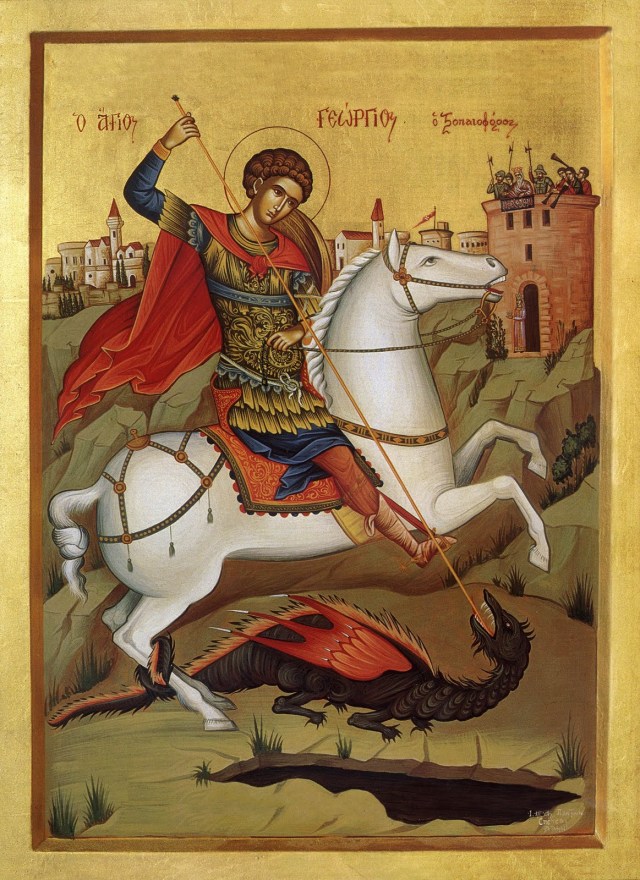 Happy feast of St. George to all my dear readers, especially to those of you who are English!  Below, I have included G. K. Chesterton’s poem “The Englishman,” which happens to be my favorite poem on St. George and one of my favorites to derive from Chesterton’s pen.  St. George, pray for us!

ST George he was for England.
And before he killed the dragon
He drank a pint of English ale
Out of an English flagon.
For though he fast right readily
In hair-shirt or in mail.
It isn’t safe to give him cakes
Unless you give him ale.

St George he was for England,
And right gallantly set free
The lady left for dragon’s meat
And tied up to a tree;
But since he stood for England
And knew what England means,
Unless you give him bacon
You mustn’t give him beans.

St George he is for England,
And shall wear the shield he wore
When we go out in armour
With the battle-cross before.
But though he is jolly company
And very pleased to dine,
It isn’t safe to give him nuts
Unless you give him wine.

“The beginning of love is the will to let those we love be perfectly themselves, the resolution not to twist them to fit our own image. If in loving them we do not love what they are, but only their potential likeness to ourselves, then we do not love them: we only love the reflection of ourselves we find in them”
―Thomas Merton, No Man Is an Island

Too often loving another person isn’t loving the person they are but who we’d like them to be. To this end we force, coerce, attempt to mold and shape the other into our ideal friend, family member, partner. We use our personality and skills to overwhelm and transition them into what we want and need.When we do this we…

With many new anime having aired their third episode, the time is not only ripe but even over ripe for a review of the anime of the past season.  So, I shall not now review Dagashi Kashi, Dimension W, Norn 9, or Utawarerumono, since I have not finished them yet.  I will say that Dagashi remaines pleasantly amusing, Dimension W is ending on a stronger note than it started on, and even Utawarerumono’s doing much better of late.  (I stalled Norn 9 on episode 4, but I want to get back to it.) I hope to get around to reviewing these shows at a later time.  You know, I feel bad for not finishing everything I started, but looking at my watchlist makes me realize that I have watched plenty of anime this season: part of the above four, six shows of regular length, two shorts, and one movie.  Not bad, even if it was more than I could chew! 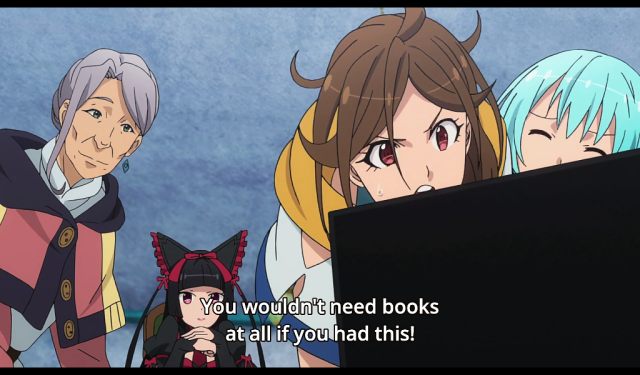 For the sake of brevity, let me point out that I have reviewed Active Raid here, Bubuki Buranki (aka BBK/BRNK) here, and both KonoSuba and Gate here for Beneath the Tangles.  Also, I have given my opinion of the bold ideas behind Garakowa here.  So, that leaves Sekkou Boys, Erased, Showa Rakugo, and Ojisan and Marshmallow for review below.

END_OF_DOCUMENT_TOKEN_TO_BE_REPLACED

Man, this has to be one of the funniest posts I’ve read in a while! I must say that I have been at least twice guilty of getting the “cold” mentioned in #6. Well, I don’t refer to myself as an otaku for nothing. xD

A great summation of the Gate series.

A Journey Through Life 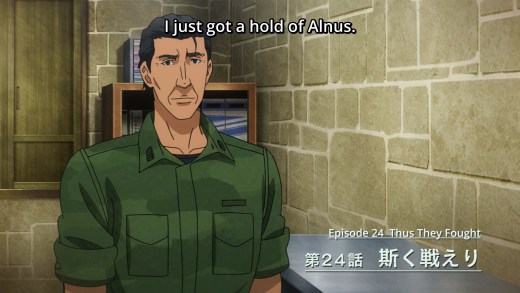 And thus the end of what has become a very enjoyable, if a little controversial, show. It wasn’t the ending I expected, but I’m quite fine with this. I know some folks would be disappointed, but frankly, it was a fun ride and it was always enjoyable from beginning to end…if not necessarily in a climax.

Well, my blog and I are both a year older.  To celebrate, I purchased the liquor closest in age which I could afford: Flor de Cana 18.  (Alright, that is not close to my age really, but it is at least more than half it, which is more than can be said for most liquor.). Would that I could share it with all of my dear readers!

Indeed, without your commentary, likes, and even just simply reading, I would cease to blog (as D. M. Dutcher, author of Cocao, Put Down the Shovel! and Triune, has unfortunately done) and become a pure bookworm.  And, I’d like to also thank those who have contacted me through IM (especially the folks at Beneath the Tangles and David A) and e-mail.  Amusingly, I recently had a high school student e-mail me asking whether I could help answer a couple of questions for a school project on anime.  I suppose being an anime enthusiast for thirteen years and aniblogger for four qualifies one for such things. 🙂 END_OF_DOCUMENT_TOKEN_TO_BE_REPLACED

As always, Caraniel turned out an excellent preview post. Looks like I’ll be watching more from this season than I initially thought!

Hiya! I’m not dead~! (It’s getting to be something of a tradition to start these posts this way I swear).  So, I ended up taking the (rather good) Winter season off – wasn’t really a plan, but I ended up being pretty busy – radio silence ensued!  But I am a creature of habit and the compulsion to put together these preview posts is strong – so here we are with a look at what the next few weeks have in store for us during the Spring 2016 season.

Happy Low Sunday or Divine Mercy Sunday!  The anime Erased has got me thinking about the topic of salvation, as you know from my last article on the show.  In the finale, Yashiro was given a final chance of salvation by Satoru on the hospital roof: the statute of limitations had expired on Yashiro’s attempted murders.  He could have continued his ordinary and law-abiding life because Satoru had prevented his evil deeds.  Yet, Yashiro could not give up his evil obsession and was caught in the very trap he set: “They have prepared a net for my steps; my soul is bowed down; they dug a pit for me; they themselves have fallen into the midst of it” (Psalms 57:6).  Like the reprobate soul I described in the past article, Yashiro pursued his own destruction despite all the help Satoru gave him.  (After all, if Socrates’ dictum that the one doing harm is harmed more than the one harmed is true, Yashiro himself received more benefit from Satoru’s acts than the children Satoru saved!) Yashiro refused to be deterred from sin and must now repent of it.