This enjoyable movie really only suffers from one defect: the presentation of this two and three quarter hour long tale causes it to drag.  It uses the sort of pacing we see in the TV series, but what works for a twenty-four minute segment suffices not for an almost three hour block of time.  One can’t treat the two the same way!  I ended up watching the movie in three sittings and do not think it detracted from my enjoyment. 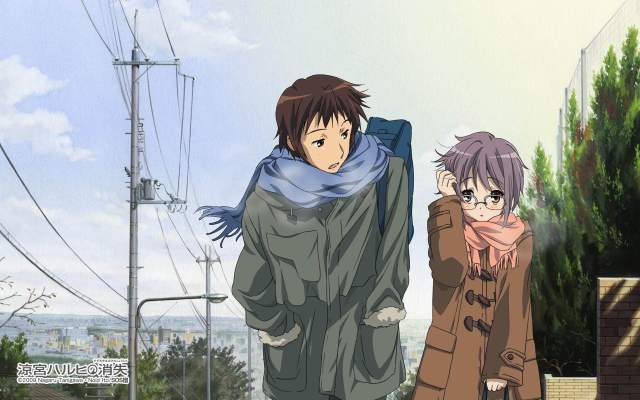 The central theme of the movie reminds me of a comment the hero’s father made in Dostoyevsky’s The Adolescent: “Life isn’t worth living without these little annoyances.” My intimate friends know that this is one of my favorite expressions, and Kyon knows this by instinct.  I almost wrote “comes to discover this over the course of the film,” but that is not precisely true.  He automatically sets about trying to restore the world as soon as he realizes Haruhi is gone.  *Spoilers from here on* But, he avoids admitting to himself that life is not worthwhile without Haruhi until the final third of the film. 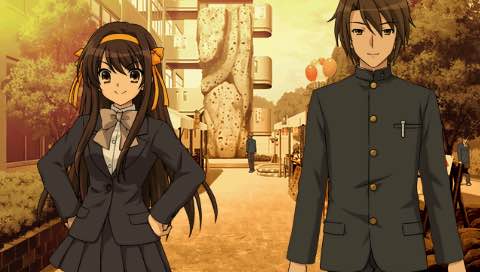 The climax of the film, the argument with his over rational and lazy half, rather reminds me of Evangelion’s ending.  Kyon’s peace-seeking half hounds him: why is it worth turning the world back to its former state?  Isn’t life better without Haruhi’s crazy schemes, antics, and fines?  Two reasons come to mind.  Let me deal with Kyon’s own answer before coming to the other one.

First, people do really desire conflict, excitement, and risk in their lives.  Justice Scalia and his closest ideological friend on the Supreme Court both loved argument.  This is despite being very peaceable gentlemen.  Others might get their excitement from anything from gambling to victory over self to video games.  (Concerning the second, C. S. Lewis once said, “Without sin, the universe is a Solemn Game: and there is no good game without rules.”) A life devoid of risk and devoted to merely quiet pleasures is the most agonizing of existences.  We want peace, but we also want glory.  And no glory, even if it be only the glory of being useful to our friends, can come without overcoming obstacles and enduring pain or little annoyances.  Therefore, Kyon chose the world he knew.

The other reason for Kyon’s choice lies also at a fundamental level: the innate desire for truth, which exists in most as a precondition for happiness or even trumps happiness.  The world revised by Nagato seems to have all the ingredients for a happy and peaceful life, but it’s a fabricated world.  We don’t want a world created by a fellow creature, even if they offered us a golden palace.  The only person we want creating the world for us is God.  That is why people naturally rebel at the idea of a Utopia: who is this man or organization to so completely impose on my life?  Are they not offering me a sham society?  But, when Our Creator and Sustainer, who knows our most intimate selves, sends us into His world, we avidly accept the struggle of submitting to His will and becoming that particular gift to others we were meant to be.  Our present society is made up of millions of human contributions added on top of what God has made.  That is what we accept as real and what we really want.

And so, I award this interesting, though drawn out, film the following:

2 comments on “Dragging Myself to 400 Anime: The Melancholy of Haruhi Suzumiya”