Usually, I try to write a post like this closer to mid-season.  A colleague at Beneath the Tangles reminded me that reviews of this season’s shows will be coming soon, so I better collect my thoughts, right?  I hope to write another post soon in the next few days on the older series which have taken up part of my leisure.

Overall, this show has struck me as above average with its fun and unusual characters and absorbing action sequences.  The most interesting moment for me thus far **Spoiler Alert** occurs when Midori, whom Aoharu had mistaken for a gentleman ere the Top Gun match, revels in crushing team Toy Gun.  He claims that losing in airsoft is worse than dying on the battlefield because one has to live with the humiliation of defeat.  Midori says that there is nothing else like being proclaimed dead and not dying.  Aoharu and her teammates are crushed by despair, because Midori’s team was the one team they hoped to vanquish. 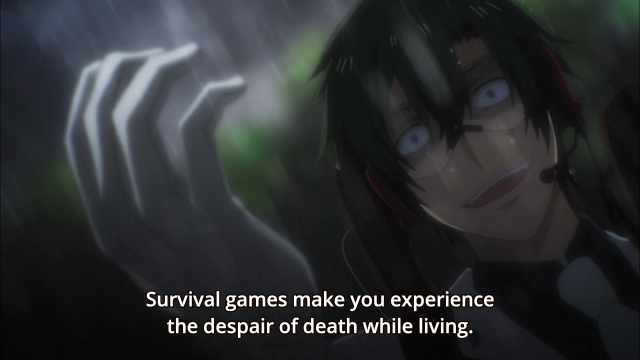 Yet, Midori is wrong when he declares that nothing is similar to this sort of defeat.  Being dead and yet not dying can also happen in spiritual combat.  We lose many spiritual battles and need to continue living with the shame of our sins and vices.  Midori reminds one of the devil in how the devil mocks us for our failures and tries to induce us to despair of salvation.  However, one need not despair of salvation: even if we commit a mortal sin, St. Maximilian Kolbe tells us that God can restore us to His grace through a single Act of Love.  Such sins do demand recourse to the confessional.  To return briefly to the anime, what happens when Aoharu confesses to her friend during lunch period?  Her friend soon gives Aoharu new strength to persevere in her airsoft hobby and to train to defeat Midori again.  In the same way, Our Great Friend, Jesus Christ, renews our spirit to walk in the way of virtue and heals all the wounds caused by sin through the sacrament of confession. 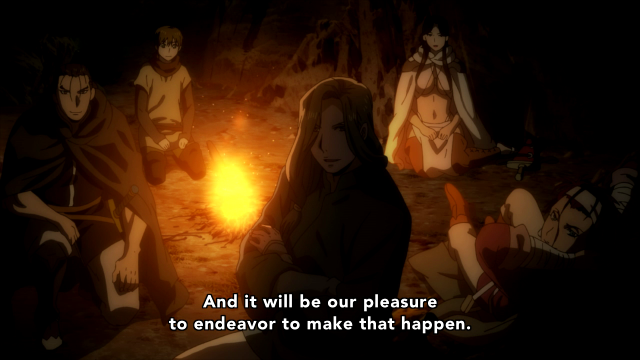 Somehow, I forgot all about this show–and it was my favorite last season!  I blame this season for boasting so many enjoyable shows.  Well, I hope to be caught up for my final review.

Considering this is an action show, that its dumb action sequences are the worst thing about it strikes one as odd.  Learning about Historical European Martial Arts has made me more critical of anime swordplay.  Gangsta does not help in having its fights involve katana or knife wielding characters beat those bearing firearms without problems.  Most of these gangsters could not hit the broad side of a barn!  Nicolas’s fights especially strain my suspension of disbelief to the breaking point–more so than the kukri wielding “Hai, so da” lady of Black Lagoon.

Gangsta‘s main strength lies in its characters, especially Nicolas and Alex.  It is rare to see a deaf person’s handicap portrayed so well.  Also rare is for a man of few words to be characterized so well.  In Alex’s case, her condition–even after being freed from her cruel slavery–manifests the evils of prostitution quite well.  Her sub-human treatment has left her neither dignity nor peace.  Reading certain blogs and political articles has made me understand that modern man (or post-modern, if you prefer) needs to be reminded that prostitution is evil.  (Even, one is tempted to believe, that evil is real–but, that’s another topic.)  The sexual revolution has not raised the dignity of women, but rather set it back a couple thousand years, especially if you talk to libertarians and progressives.  Many persons in either camp (thankfully, not all) think that laws prohibiting prostitution limit human freedom.  What dull creatures they are!

I have somewhat reconciled myself to the fact that the writer did not intend to show us exciting battles between the Empire beyond the Gate and the JSDF.  The only battle with the dragon struck me as fun.  This show is ultimately about the superiority of civilization over barbarism, a point which I wholeheartedly agree on, and showing off the awesomeness of the JSDF.  One wishes that its portrayal of the United States was more positive, but that can’t be helped. 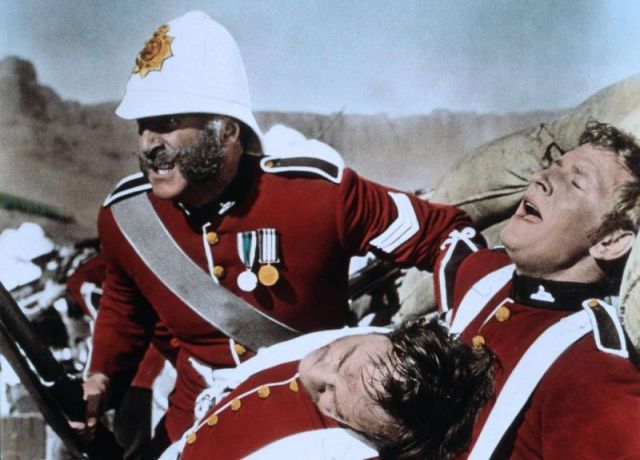 A screenshot from the movie Zulu.

I hoped that this show would eventually becomes more reminiscent of the movie Zulu–that the natives in the anime would be crafty and brave enough to give the JSDF real trouble.  If the battles with the JSDF were not merely slaughters, Gate would be higher on my list.  At the moment, I’m contemplating giving it 2 1/2 stars.  (Oh, and be sure to watch Zulu if you’ve never seen it.  The movie boasts Michael Caine’s first role, is one of the most accurate war movies ever made, and stands as my personal favorite movie to boot.) 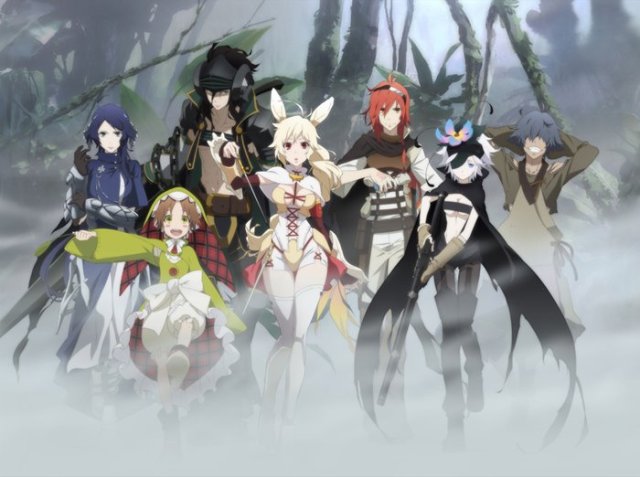 This show quickly became my favorite of those which premiered this season.  The story contains the traditional good verses evil plot, but the setting reminds one of Incan Civilization, which is highly unusual within fantasy.  I say traditional good vs. evil plot, but it has a brilliant combination of action, intrigue, and soul.  One wishes that this show will go on forever.  Hopefully, I’ll have more to say in the future, but I find myself so fascinated by the show that I can’t find the words to describe it in more detail. 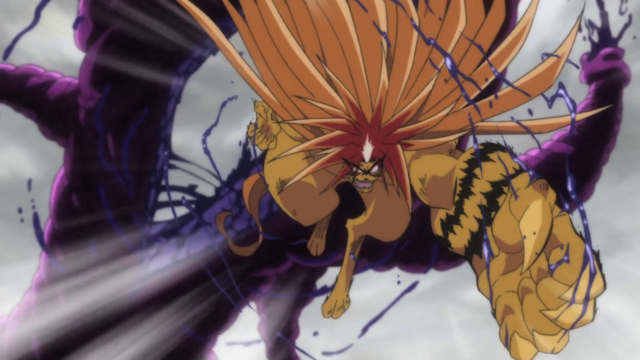 This show turned out to be more entertaining than I thought that it would be.  Several episodes were cool, but episode nine struck me as having a very interesting point.  Its plot juxtaposes restorative vs. retributive justice.  Juurou, a kamaitachi forced from his homeland with his two youkai siblings, starts slaughtering human beings in revenge.  Juurou’s brother and sister beg Ushio to slay Juurou, but Ushio is opposed to it–mostly because of who asks it and because he does not want to be someone’s executioner.

Ushio tries to spare Juurou in the course of the episode, even though Juurou nearly kills him.  For a moment, one might think that he’s capable of reform; however, Juurou attacks Ushio after saving his siblings, forcing Ushio to slay him, which puts Juurou at peace.  This reminds me of a point made by Russell Kirk about capital punishment: some criminals become monsters through repeated serious offences and can only find peace in death.  One would wish to see their humanity restored through imprisonment and them repenting of their crime; but, only God can heal the wounds of sin, and sometimes that takes Purgatory.  The crime must be punished, but in the punishment may lie the cure–even in the case of death.

As sdshamshel of OGIUE MANIAX says, at two to three minutes an episode, there is no reason for you not to try this show out.  It shows the foodie exploits of Wakako, an office lady with a taste for fine food and drink.  All of the pairings are pretty simple: she always pairs warm sake, cold sake, or beer with a dish of Japanese cuisine.  Her running commentary is very amusing also.

So, what do my dear readers think of the above shows?  Any favorites among them?

15 comments on “Summer Anime 2015: Collecting My Thoughts Ere the End”