Today, I have completed watching the forty-two episode long Space Pirate Captain Harlock.  I can recommend few series to my dear readers as heartily.  If you check my Top Fifty Anime Series list, you’ll see that I placed this classic in sixth place–below Wolf’s Rain and above Mardock Scramble.  (Soukou no Strain has sadly dropped off the list, leaving Gokudo precariously in last place.)  Nothing shakes up a top fifty list like watching acknowledged classics!  I heartily recommend Anime Classics Zettai! by Brian Camp and Julie Davis, which fairly represents the best anime OVAs, movies, and series until the year 2007.  Who knows?  You might find yourself a new favorite.

Briefly, let me explain why Captain Harlock so deeply appeals to me.  My dear readers likely know that Japan’s martial arts tradition stands as my first introduction to Japanese culture.  I used to study Judo and Aikido and devoured books by and about Morihei Ueshiba, Gichin Funakoshi, Nitobe Inazo, and Miyamoto Musashi.  These books express the warrior-philosopher ethos known as Bushido.  In recent years, Japan has become much more cosmopolitan, and many anime refer to Bushido comically or treat it as old fashioned or obsolete.

END_OF_DOCUMENT_TOKEN_TO_BE_REPLACED

One of my all time favorite saints has just reached a new level of awesomeness to my mind by being the patron saint of bacon. The author links to St. Athanasius’s Life of St. Anthony, which is one of the greatest works of hagiography, and I encourage you all to read it.

St. Anthony the Abbot, the Egyptian Early Christian and founder of most organized monasticism, is generally depicted with the attribute of a pig, because he once saw the devil in the form of a pig.

(He got bugged by lots of demons, but generally paid them no mind. He compared demons to mosquitos – always around, always annoying, but not a real danger.)

In the usual humorous style of picking patrons, the presence of the pig attribute led to St. Anthony (who ate no meat as part of his ascetic practices) becoming the patron saint of pigs, butchers, and bacon curing, as well as all livestock and animals.

St. Athanasius wrote an extremely popular biography of St. Anthony the Abbot. You can read it here, or in this version with footnotes.

Other patron saints of butchers include St. Adrian (a Roman soldier who got butchered during his martyrdom)…

One scene in The Rose of Versailles features Oscar and André, Oscar’s valet and greatest friend, fencing quite vigorously.  At the end of which, Oscar compliments André by saying that he’s become quite a challenge while fencing “with sharp swords.”  A few years ago, this would have caused me to roll my eyes in disgust.  I would think to myself: “Practicing with sharp swords!  That wasn’t done, and you both have a death wish!”  I had that very response towards A Game of Thrones when Joffrey demands that he and one of Ned Stark’s sons spare with sharps instead of wooden swords, and the fencing master refuses to permit it–though he offers that they might practice with blunts.

Very many of you likely have the same opinion as I used to.  One of the first books on medieval fencing I ever read, John Clements’ Medieval Swordsmanship, does not talk about sparring with sharps anywhere.  It recommends cutting practice, technique drills, and sparring with boffers, wooden swords, or synthetic ones.  I used to figure that by combining the three one can “triangulate” in order to understand what fighting with a real sword would feel like.  In addition, I read two accounting of practicing with sharp swords which boded ill for one of the fencers.  In one viking saga, a father trains against his son while using a cursed blade.  The sword having been knocked backwards with a certain parry, it buries itself in the father’s brain and makes an end of him.  On the other occasion, Alexandre Dumas recounts in one of his historical fictions that people at first practiced without foils, but with swords having a point and sharp edges.  During one practicing bout, one fellow was stabbed sixteen times and fell dead after the session.  Both reinforce the idea that fencing with sharp swords is a very, very bad idea.

END_OF_DOCUMENT_TOKEN_TO_BE_REPLACED

It makes me happy to see that Noragami is getting a second season. The trailer looks pretty good.

“A young monk asked his Father Abbott how to find contentment and stillness in a world where things are always changing, where nothing is permanent and nothing remains the same. ‘When loss and grief are inherent in our very coming in to existence, how can there be any happiness?’

That elder monk, looking compassionately at his brother held up a glass which he had been drinking from said: ‘You see this goblet? For me, this glass is already broken. I enjoy it. I drink out of it. It holds my water admirably. Sometimes even the sun reflects in its beautiful patterns. If I should tap it. it has a lovely ring to it.’

‘But when I put this glass on a shelf and the wind knocks it over or my elbow brushes it off the table and it falls to the ground and shatters I say; ‘Of course!’ I understand that this glass is already broken. Every moment with it…

In a recent episode of The Rose of Versailles, Oscar’s coldness towards the now Queen Marie Antoinette struck me as too severe.  Since her rescue of Marie Antoinette, the queen has always held Oscar in esteem, and she uses her new authority to pour favors onto Oscar’s lap: she raises Oscar to the post of regimental commander and lavishes her with gifts.  However, Oscar turns down the gifts, sets conditions on her promotion, and only associates with Antoinette to the degree that her duty prescribes.  At the same time, Oscar bemoans Antoinette’s lavish spending, her neglect of royal duties, and the plight of the poor.

I find myself vexed with Oscar’s attitude.  Her polar opposite is a young Swedish nobleman by the name of Fersen, who basks in Marie Antoinette’s presence and adores the young lady for her beauty and grace.  At times, he tries to remind Antoinette of…

The idea for this article was ignited by my fascination with Robert E. Lee, with the flames of my imagination first stoked by Robert E. Lee on Leadership by H. W. Crocker III and fanned into a blaze by Emory Thomas’s Robert E. Lee: A Biography and Michael Korda’s Clouds of Glory, the latter of which I could not finish because its repetitiveness wore me out.  At the same time as I read the latter, I started watching Captain Harlock and could not but note the similarity between the personalities and struggles of Lee and Harlock.  Sure, they hold polar opposite views and habits concerning alcohol, but most of their other differences are superficial.  When you’ve finished the article, be sure to tell me whether you are struck by the same fact as your humble author: that Captain Harlock is the closest approximation to R. E. Lee among anime characters.

Both figures impress one with how their polish and perfection mingle with a spirit of humility.  Lee was dubbed “the Marble Man” at West Point for his perfect obedience to his superiors and adherence to duty.  (Lee graduated West Point without a single demerit.)  With Harlock, we have also yet to see a real character flaw, save for Harlock’s audacity and alcoholic indulgence–though, Harlock even carries his indulgence to perfection as he never behaves drunkenly.  The characters of Space Pirate Captain Harlock look up to their captain in the same way that many looked up to Lee as a peerless soldier during his lifetime.

END_OF_DOCUMENT_TOKEN_TO_BE_REPLACED

Here’s my latest post for my Examining Old School Anime Column on Beneath the Tangles. For a change of pace, I write about a theme in The Rose of Versailles.

Let me take a break from Space Pirate Captain Harlock this week.  Thanks to the enthusiastic recommendation of iblessall, I have picked up an awesome new anime titled The Rose of Versailles.  You might have never heard of this gem from 1979, but I can assure you that every fan of exciting swordplay and historical fiction will become endeared to the story of Oscar Francois de Jarjayes’s adventures in Pre-Revolutionary France.  (If you liked Rurouni Kenshin or Carried by the Wind: Tsukikage Ran, watch this old school gem!)  Within the first episode, Oscar becomes the commander of Marie Antoinette’s bodyguard and soon becomes one of the new princess’s favorite courtiers. 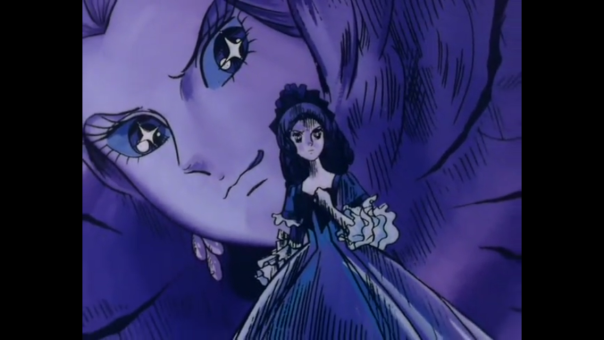 Immediately upon setting foot into Versailles, Marie Antoinette manages to start a controversy.  Court rules dictate that a lady of lower station is forbidden from first addressing one of higher station.  When Marie Antoinette gets a bad…