The twenty-third volume of Rurouni Kenshin forms part of the Jinchuu Arc and distinguishes itself for its two duels: Saito vs. Yatsume (Literally, “eight eyes,” but typing it out in English makes it look like “the damn guy.” xD) and Kenshin vs. Enishi.  Yatsume is one of the assassins who originally tried to kill Kenshin in the trap set for him by the Tokugawa gov’t during the last days of the Shogunate, but Yatsume fled after Kenshin thrust a wakizashi through his hand.  He felt disappointed not to fight Kenshin first, but you can be certain that Saito was more than a match for him–a very exciting duel indeed.  We learn about the origins of both Yatsume and Enishi’s prowess; though, I could not help but feel underwhelmed with the “pirate martial arts” of which Enishi boasts.  After all, English pirates beat Wakou in one famous encounter.  Perhaps, George Silver’s English martial arts is superior to both Watou-jutsu and Hitenmitsurugi-ryu?  Anyway, you can tell that I’m annoyed with this made up martial art.  Let me continue with the article.

Saito, the most awesome character in manga, levels insults almost as well as Alucard. 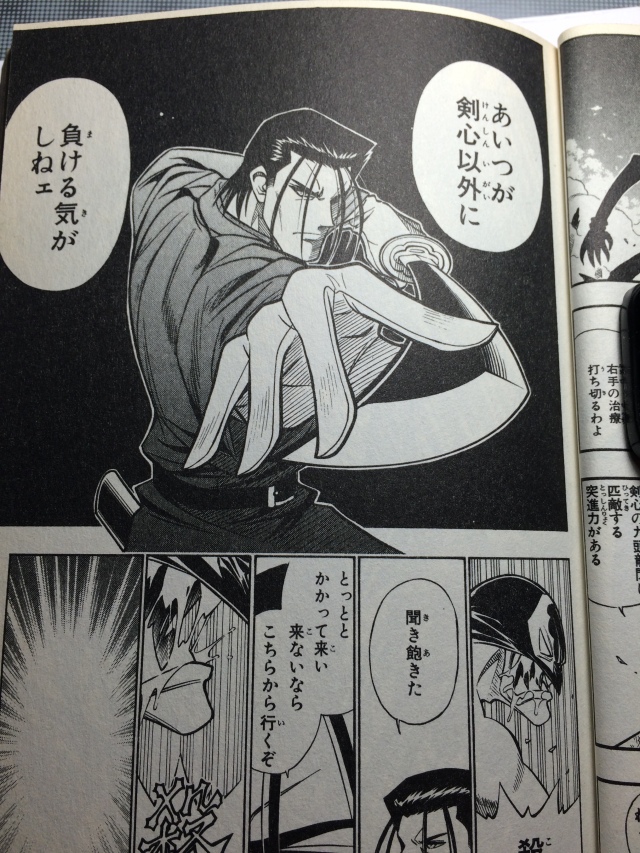 This volume continues to develop the theme of jinchuu or human justice.   The death of Enishi’s sister Tomoe starts off this particular episode of revenge, but Rurouni Kenshin is rife with similar revenge stories: Sanosuke Sagara wants revenge on the government for the death of his captain, Yahiko also has grievances against the Meiji government, Shishio as well, the boy Kenshin finds in Shingetsu village wants revenge for his parents, and Kenshin himself has reasons for wanting revenge against certain bandits–except that Kenshin essentially overcomes his desire for revenge through forgiveness; though, the perpetrators in Kenshin’s case are already dead.  In these cases, either Kenshin dissuades the avenger or fights him to the death (as we see with Shishio).  Enishi’s case bears a significant difference: Tomoe chose to die for Kenshin.  (She forgave him, which provides an interesting parallel to Kenshin’s forgiveness of the bandits who killed those closest to him.  There’s something there, I tell you!) 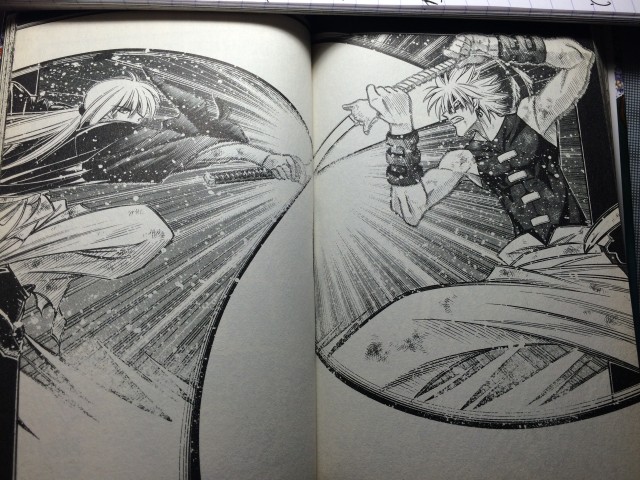 In the other cases of revenge, we see malice behind the crimes.  But, with Tomoe, love effects the deed for which Enishi wants revenge.  Hence, Enishi pursues jinchuu for a deed which perhaps heaven smiled upon as the greatest sacrifice which can be made for another person: to die for them.  So, it is impossible for Enishi to pursue Kenshin under seigi, the usual word used for justice in Japanese.  Under seigi, one cannot avenge oneself on someone for receiving another’s good will. 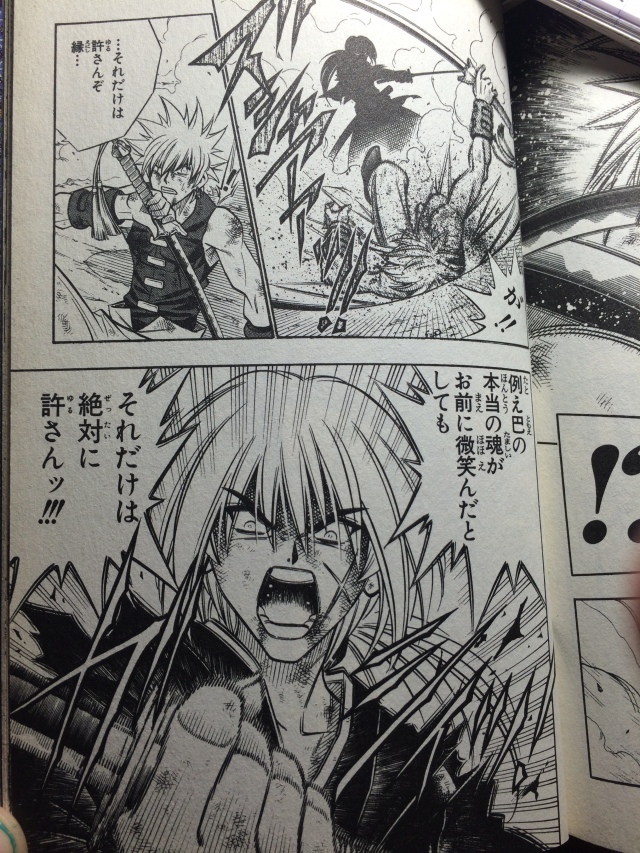 On a final note, Watsuki has a wonderful ability to craft intense scenes, and this volume has some excellent moments.  Unfortunately, my desire to spoil nothing bids me be silent on them.  Essentially, you need to read Rurouni Kenshin–possibly the greatest manga in history.