Here is another article on Ashita no Joe which I have written for Beneath the Tangles. This one examines how Yoko Shiraki fulfills a Marian role in the series. I expect that it will be my last article on this classic anime.

Greetings to our dear readers!  Having accepted TWWK’s invitation to write for Beneath the Tangles, we decided that blogging about old school anime (anime produced in the 80’s and in prior decades) would make for an interesting addition to the blog and introduce fans to some great old series.  This column shall point out and discuss themes in old school anime from a Catholic viewpoint.  Hopefully, the articles will both encourage you to explore older anime and provide ideas which will enrich your meditations on the Faith.

I skipped writing this column a fortnight ago because a break from blogging and anime felt necessary.  I thought that I would need two months, but two weeks proved more than enough of a refrigerium.  I am taking this opportunity to write my last article on Ashita no Joe before I turn my attention to Space Pirate Captain Harlock.  (The famous Crispin…

In my last Quick Takes article, I noted how realistic Maria the Virgin Witch’s presentation of combat, weapons, and armor in the Hundred Years War was.  It’s cool to see that Skallagrim has also watched this series and made a video in praise of the realistic details.  He adds many more points than what my article mentions, and I encourage all my readers to check the video out.

Oh, yes, I’ve decided to come out of hiatus earlier than planned.  I have accomplished certain goals which were set in me taking the break, and I missed interacting with my dear readers too much anyway.  Expect another article tomorrow!

END_OF_DOCUMENT_TOKEN_TO_BE_REPLACED

A couple of days from the Feast of Divine Mercy appears apropos for writing a couple of reviews on spiritual books, which I distinguish from theological works by their focus on devotion rather than discerning doctrinal truths.  Don’t forget to obtain a plenary indulgence this Sunday!  (It’s not often that I get a chance to link back to the third post I ever wrote.)  After all, the more mercy we receive from God the more our confidence in God and generosity to others grows.  The less mercy we obtain, the less time we spend in prayer and the fewer our occasions of receiving the sacraments–especially the Sacrament of Reconciliation, the less confidence we place in God.  I have come across a few people who claim that they cannot enter a Church lest it burn down!  I know that they jested, but it does reveal a lack of confidence if nothing else!  Instead of being struck dumbfounded on these occasions, would that I had told them that their sins were the only things which would burn up upon entering a Church!

But, the spirit of confidence in God’s mercy imbues both St. Alphonsus de Liguori’s How to Converse with God and St. Francis de Sales’ The Art of Loving God.  De Sales wrote during the Counter-Reformation, while de Liguori wrote during the 18th century; but, de Liguori’s works have the savor of the Counter-Reformation, especially Prayer: the Great Means of Salvation and of Perfection.  Unlike the aforementioned book and St. Francis’ masterpiece, A Treatise on the Love of God, the two books in question are both very short.  De Liguori’s book is the size of a Lenten devotional one might pick up from church.  De Sales’ The Art of Loving God fits easily into a jacket pocket.

END_OF_DOCUMENT_TOKEN_TO_BE_REPLACED

This is pretty cool. A Medieval recipe succeeds in killing MRSA bacteria.

Medieval physicians get a lot of guff for their prescriptions, which were often based on discredited Greek humor theory or astrology.

However, a lot of their medicines were based on experience, too, and some of them work quite well.

So, in the desperate search for something that kills antibiotic-resistant MRSA dead but doesn’t kill the patient, medical science has gone back to examine medieval ointments and salves.

It now appears that “Bald’s eyesalve,” a 10th century Saxon mix of garlic, wine, leek or onion juice, oxgall, and brass chemical byproducts, does kill 99.99% of MRSA on mouse skin samples, when applied topically. (Which is to say that they removed the skin from the mice and gave it MRSA, not that they gave MRSA to the mice.) They also tested versions which contained only one or two of the main ingredients, or only water cooked in the brass vessel, or…

And I thought that Junketsu no Maria would be the only anime I ever watched which would refer to St. Augustine even in passing.

Gunslinger Stratos is a brand new anime, set in a world where Japan is composed of two colliding alternate universes. One layer of the country is a sort of Japanese futuristic post-disaster Wild West, with advanced gun technology and a libertarian ethos. The other side is basically a prosperous futuristic Japan, but regions have become sovereign nations… and there’s a lot of totalitarianism and cronyism, and wars going on somewhere. People are disappearing from one universe to the next… or is it from one time to another?

The first frame of the anime is the following quote from St. Augustine’s Confessions, book 11, chapter 14, 17, along with a sound effect of a ticking clock:

What, then, is time?

If no one asks me, I know what it is.

If I wish to explain it to him who asks, I do not know.

On this Easter, both this site and myself age one year.  This is the only time I can recollect my birthday has falling on Easter.  Does this coincidence mean that Medieval Otaku will gain a fresh breath of life?  That I shall set a new and vigorous posting schedule for my third year as a blogger?  No, I’ll probably continue writing on random themes which usually touch upon the Middle Ages, Catholicism, or anime as my dear readers are accustomed.  Thank you to all my dear readers who have enjoyed reading these posts over the past year.  As I always say, you need to struggle through many mediocre posts before finding the few gems which fall Deo iuvante.  Let me give you the low down on the posts you shall be seeing on here in the near future.

END_OF_DOCUMENT_TOKEN_TO_BE_REPLACED

Here’s a post I originally intended for my column on Beneath the Tangles.  However, I forgot that the site is concentrating on Key visual novels for Holy Week.  But, the article came out decently well and it have a perfect screencap for April Fools’ Day, so I’m posting it here.  Next week, I’ll go back to writing about Ashita no Joe for the column Examining Old School Anime.  Hope that you enjoy it!

This April Fools’ Day, let’s take a break from Ashita no Joe and delve into Urusei Yatsura instead.  I wished to write about something more humorous than usual and figured that romantic love made for the perfect topic.  But, just how is romantic love a religious topic?  Why, moral theology concerns itself with romance, especially the sins of lust, more than any other topic!  Consider that two out of the ten commandments prohibit lust, one of the Six Precepts of the Roman Catholic Church bids us to follow Church laws on marriage, St. Paul singles out fornication as the sin to avoid most (1 Cor. 6:18), fornication was a prominent issue at the very first Church Council in the Acts of the Apostles, romance stands as the chief difference between the ordinary vocation (marriage) and the other three vocations (single, priestly, and religious), and Christ’s very relationship with the Church is described as a kind of romance with the Church as the bride of Christ. 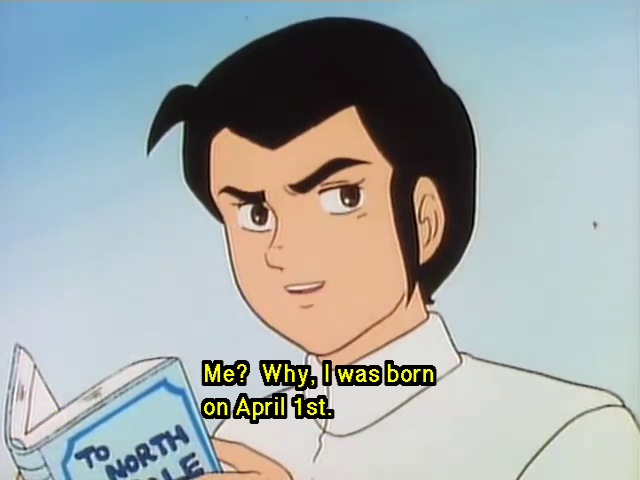 But, the Church deals with romance as a grave matter; however, that’s the least helpful way to deal with romance in one’s personal life.  Imagine proposing to someone by saying that they wish to marry them in order to build up the Body of Christ and cool the flames of lust.  How quickly would anyone run away from such a proposal!  St. Francis de Sales puts the matter much better: “If a man and woman love each other, they should marry.”  Love itself has been described in Plato as “divine madness.”  When one considers all the absurdities and misunderstandings concomitant with romantic love, the idea of divine madness applies to this form of love more perfectly than the others.  Traditionally, these misunderstandings are said to have been caused by the Fall.  Yet, since Adam and Eve did not realize the simple concept that they should talk over major decisions before making them, the relationship between the sexes could not have been too much better in the state of Original Justice.