Here’s an anime which I want to recommend to old and young.  This show contains many elements which most anime fans and even their parents may appreciate.  (For those anime fans living with their parents, these kinds of shows are good to know.  Who knows what sort of ideas may run through your dear father and mother’s heads if you’re never willing to share what you watch?)  The characters tend to be older than the teenage heroes filling most anime, which allows older audiences to identify with them better.  Our heroine, Balsa, is a twenty-seven year old wandering bodyguard who wishes to expiate the deaths of eight men by saving eight others without killing anyone in the process.  True, the idea of a hero refusing to kill has been done before in many series, like Trigun, Rurouni Kenshin, Grenadier, Black Cat, and Trinity Blood; however, this trope usually makes a show more interesting–with the exception of Trinity Blood, where Abel’s aversion to killing comes out of nowhere.  (I remember thinking to myself: “Didn’t you just crush some vampire’s heart a few episodes ago?”  And yes, the resolution not to kill even renders Grenadier more interesting, but don’t expect me to recommend it to you!)  Balsa becomes involved with the Crown Prince of the New Yogo Empire, Prince Chagum, when she saves him from drowning in a spectacular rescue.  Chagum’s mother, one of the emperor’s consorts, brings her into the palace under the pretext of thanking Balsa by proving a sumptuous dinner and luxurious accommodations.  Which reminds me of my favorite quote from the series: “If you have money, life ends up being the same no matter where you go.  However, if you don’t have money, you learn to live your life according to where you are.”

In the middle of the night, Balsa is summoned before Chagum’s mother.  (In this political system, it feels a stretch to call her an empress.)  His mother begs Balsa to take Chagum away with her and to guard him from assassins.  You see, dear readers, Prince Chagum is an embarrassment to the state due to him carrying about a water spirit inside of him; so, his own father, the emperor, is sending assassins after him who are trying to make his death look like an accident in order to prevent the dynasty from losing face and possibly causing civil unrest.  Balsa thinks that she has no choice but to accept; however, she consoles herself with the fact that this mission will atone for her eighth life.  After burning down the prince’s quarters to delay pursuit, she exits the palace with Prince Chagum in what will be a long bodyguard assignment. 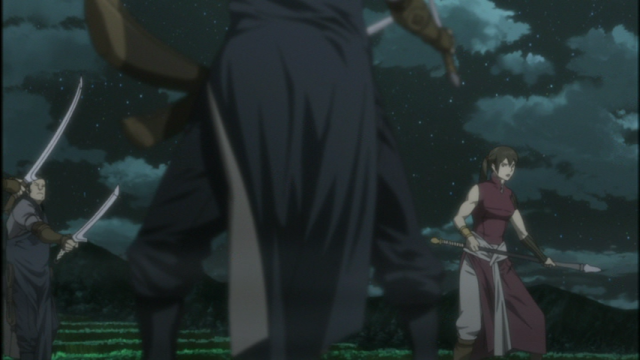 Seirei no Moribito‘s plot ranges from slow, character building episodes involving the maturing of Prince Chagum and gathering information about Chagum’s spirit to moments of extreme danger and action as Chagum’s pursuers clash with Balsa.  So, while the heroine’s spear does remain sheathed much of the time, the viewer never lapses into boredom: either we are kept at the edge of our seats by imminent danger and spear-play or we enjoy the interaction of the characters, who are incredibly likeable.  Perhaps because Moribito derives from a series of light novels, the world of this series is remarkably detailed and enjoyable to learn about: the culture, myths, imperial customs, and the interaction between the spirit world (Nayug) with the ordinary world add interest without bogging down the viewer in too many details.

Further, the series has a distinct intellectual appeal due to the maturity of the characters and its use of parallelism.  The characters all seem very real, as if some of the people we know were somehow transported into a fantasy setting.  However, they have to work in a world where honor and strict social morays influences everything they do.  At the same time, Moribito resists the temptation to over-psychoanalyze.  Concerning parallelism, character’s roles and their actions are constantly being juxtaposed by the plot: we compare Balsa to Chagum’s mother, Balsa to the man who raised her, Balsa’s father to Chagum’s mother, Chagum to the young Balsa, etc.  This serves to render the plot and the characters that much deeper. 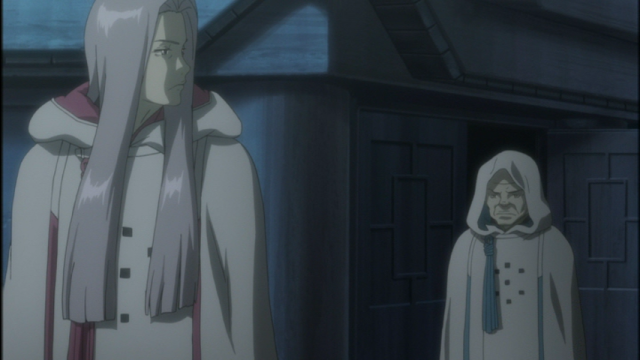 This show also features some great animation.  The backgrounds portraying forests, mountains, and the world of Nayug can be particularly breathtaking.  Character animation stands above average, while the use of CGI is limited to large troop movements and other large bodies of people, which stands out as the weakest part of the animation.  Fortunately, the animators do not employ CGI enough to detract from the overall effect of the splendid animation.

Overall, the only anime fan to whom this series would not appeal is the kind who thrives on action.  The action sequences, though awesome, are fewer than one would find in a standard action/adventure anime.  If you cannot stand seeing characters’ weapons sheathed, by all means watch Jubei-chan II.  (This little mentioned show has some of the best sword fights ever animated, while at the same time having some of the blandest characters, most failed attempts at comedy, and weakest plot of any series.  But, the fights are worth the agony of sitting through the other stuff.)  So, take the time to enjoy this show, and, if possible, ask your parents to watch it with you–you just might convince them that anime’s not completely weird.

2 comments on “Swords, Sorcery, and Spears: A Little Review of Seirei no Moribito”