Both a passage from the Revelations of St. Gertrude and the fact that today is the Feast of St. Matthias (the Apostle who was chosen after Pentecost to take the position which had been held by Judas Iscariot) combined to give me the idea of this post.  While conversing with St. Gertrude, Jesus Christ told her (oh, if that sounded rather unexpected, be sure to read my little review of the work) that it had come to his attention that she had no apostle.  Thereupon, he presented St. John the Evangelist as her patron, and we are treated to a wide variety of revelations about how his purity and love of God and neighbor earned him many special joys in heaven.  Which reminds me of another passage where St. Gertrude asked Jesus what he was thinking about.  He responded by saying that he was thinking of how to reward St. Gertrude’s every good deed, good word, and good thought a hundred times over in heaven.  To think that in exchange for seventy years of toil, we gain an eternity of rest where we shall be rewarded infinitely above our deserts! 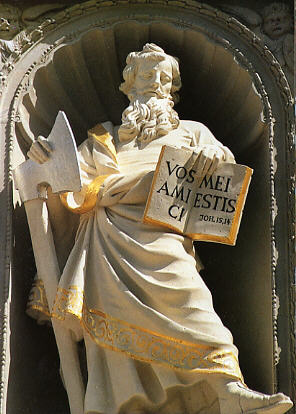 To return to the topic, reading this passage inspired me to have a devotion to St. Bartholomew.  (Thoughts about the greatness of the saints’ charity have inspired another digression.  Think of how great the difference must be between even the least saint in heaven and those of us still struggling down here.  How eager they are to listen to us and help us despite our wretchedness!  Imagine a shabby beggar approaching a richly dressed duke and asking the duke to petition the king for him.  Not only does the duke not turn the beggar away, but even directly makes his way to the king.  Further, he brings the beggar’s petition before the king and even asks the king to consider it as a request directly from him.)  I had long been attracted by those character traits of St. Bartholomew visible in the short passage where he features in the Gospel of John (John 1:43-50): his cheerfulness, simplicity, honesty, and wholeheartedness.  Also, one seems drawn into the joy with which Our Lord greets him: “Behold, a true Israelite, in whom there is no guile.”  Then, the life of St. Bartholomew in the Aurea Legenda in which he converts an Indian kingdom from paganism by forcing the demon in the main idol to destroy this idol and all the other idols in the temple, and then having an angel present the demon in chains to the converted king is rather awesome.  Unfortunately, the king’s brother took offense at this, and–depite St. Bartholomew also defeating his idol–has St. Bartholomew flayed alive.  The chronicler also mentions that some people say he was flayed alive in Armenia, which is the most accepted version.  Needless to say, the king and his priests meet a bad end.

So, my question to you, dear readers, is whether you have a favorite apostle?  The reason may be because you value his intercession and/or are attracted to his character.  Did you decide on this only through scriptural accounts or did you look at other material?  St. Paul is a valid option too, by the way.